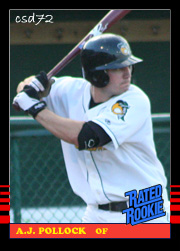 A.J. was a star at Notre Dame. You might not have heard of him as much as you should of though because they school was still getting over the Jeff Samardzija days. He was a solid hitter that could really cover some ground in center. I enjoyed watching him at Notre Dame, and was thrilled to hear the Diamondbacks drafted him 17th because that meant I had a shot to watch him again with the Silverhawks. I saw him get a hit on the MLB Network with the big club yesterday, and it reminded me how high the ceiling really is for this kid.

This picture was taken in 2009 when AJ was just starting his Silverhawk career. He came to the team late in the year so he only really played the second half of the season before moving on in the organization. It would be great to see him play for the big club eventually. He will be up there with Lyle Overbay and Justin Upton as players who I loved to watch in South Bend who I saw play in the majors later.