As I have stated on this blog before Kurt has been a favorite of mine since the 2004 College World Series. He was really fun to watch as his team marched towards the title. I happened to be there the day his Cal State Fullerton team clinched it with a win against Texas. That was the only day I could attend the series, but it turned out to be a very good one. END_OF_DOCUMENT_TOKEN_TO_BE_REPLACED 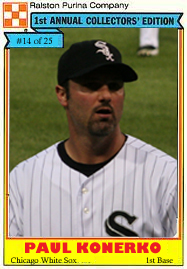 This is another of the cards that I made last night while the snow was piling up outside. As a kid these smaller sets were like gold. Our local card store was actually a jewelery store with a small section in the back with baseball cards. They mostly dealt in the large sets so these cards were rare. That might be why I like them so much. They were so rare to me as a child that now they now seem like something much bigger than they actually are. I liked the idea of trying to make one of these cards. END_OF_DOCUMENT_TOKEN_TO_BE_REPLACED