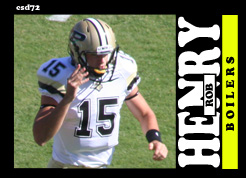 I finally have internet access again although it is only a one day deal. I hopefully will be back up and running by tomorrow. I have been gone it seems like forever. In that time one of the highlights of this upcoming football season has now gone away. Rob Henry went down with a torn ACL yesterday in practice. Last season he came out of nowhere to provide a lot of excitement right away. His fleet feet behind center gave Purdue its first road win against a ranked opponent in his first start at Northwestern. I will be sad that he isn’t on the field this season, but I am still excited for the football season that will start in a little over a week. END_OF_DOCUMENT_TOKEN_TO_BE_REPLACED 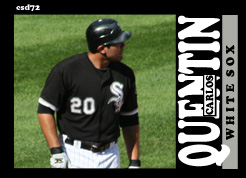 While making the Dan Dierking cards earlier today I decided to try a baseball card. I probably would never have thought of doing this, but I saw this exact make of card used for a Josh Hamilton card on A Hair Off Square earlier this year. I figured why not give it a try. Carlos is one of my favorite Sox players because we share a birthday. He seems to have been given all of the baseball skills though. END_OF_DOCUMENT_TOKEN_TO_BE_REPLACED 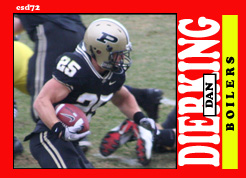 I had this template for the ’85 Topps football card and thought that I would try and make one of the very red box bottom cards. Maybe I am just over nostalgic, but I like this card as well. It is very red, but does show off the card very well. I don’t know that I will make too many of these, but I might make a couple more of them. END_OF_DOCUMENT_TOKEN_TO_BE_REPLACED 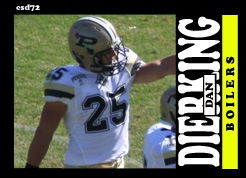 I made a half-hearted attempt at this card last year before I knew my way around Photoshop. I thought that I would try and update the card to how I remember it. I really like how this card looks, and I may even try a couple with baseball players on them. This is a classic simple design, but for some reason I really like it. I chose Dan Dierking to kick off this set because I really enjoyed watching him play for four years at Purdue. With a little size he would have been a monster. His reckless abandon on kickoff team was fun to watch. END_OF_DOCUMENT_TOKEN_TO_BE_REPLACED