Not too long from now I will be leaving here to go to U.S. Cellular Field to the statue of Frank Thomas get unveiled. I thought that it would be cool to post a card of Frank today. This was another card that I made to over the winter to commemorate 25 years of going to Major League games. Just a couple of days after that anniversary I was back at the ballpark to see Frank get his number retired. This picture was taken during his speech. END_OF_DOCUMENT_TOKEN_TO_BE_REPLACED 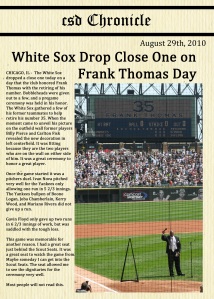 I came up with this idea a while back, but did not know how I wanted to implement it. I thought that for the preview set I would try and make a couple of these cards to try my idea out. I went to quite a few baseball games last year. I thought for this years set I would make a card for each game that I go to. I liked the idea of having it appear to be a newspaper on the front. I wanted a headline and a picture that told some part of the story of the game. What started then I was just going to have garble on the side. I ended up writing a small bit about the game on the side. I like how this turned out, and this might be the design I use for the games I attend in 2011. END_OF_DOCUMENT_TOKEN_TO_BE_REPLACED 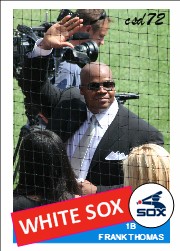