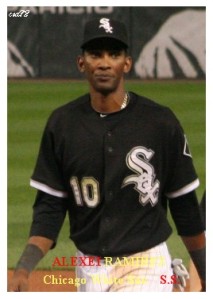 Since he just hit an extra inning home run to win the game I thought that I would close tonight with an Alexei Ramirez card. He is one of my favorite players, and I love his reaction when he knows that he has just hit a game winner. He helped the Sox avoid another bad loss tonight, and for that he gets another card on the site. END_OF_DOCUMENT_TOKEN_TO_BE_REPLACED 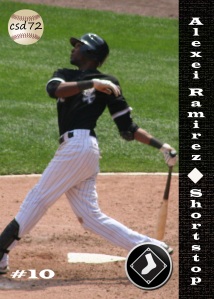 I might as well keep the Cuban theme going tonight by posting my preview card of Alexei Ramirez. I have loved watching him play since his first spring with the Sox. He started the season off slow, but quickly became a star on the South Side. He is a fun player to watch, and I don’t think that he has reached his potential yet. That is scary. END_OF_DOCUMENT_TOKEN_TO_BE_REPLACED

I already had a card for this set for Alexei when I made this one. Thankfully I already set a little precedent by just changing the logo on the card. The other Alexei had the new logo on it so I just placed the logo that was on the original card here. This card is actually very easy once the template is made. In photoshop I have the teams I have used on the sidebar so I just click on the right one, and it appears where it should. Then I just have to change the name and position and I am good to go. END_OF_DOCUMENT_TOKEN_TO_BE_REPLACED 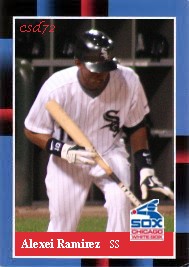 It had to be hard to top the 1987 Topps card. They were very popular, and the competition was heating up even more in ’88. In addition to Topps and Fleer Donruss had to compete with a new company called Score. They had to come up with a design that would grab the collectors attention. This card certainly grabbed the attention of anyone holding them. This was never my favorite design, but it is growing on me over the years. I even posted way too many of these cards the other day onto the site. END_OF_DOCUMENT_TOKEN_TO_BE_REPLACED

Saturation Sunday will close with this 1988 Score replica card of Alexei Ramirez. When he first came to the White Sox I had never heard of him. He had a great spring in 2008 making the team. He struggled out of the gate, but then performed to the level that had him in the Rookie of the Year talk. He is one of my favorite players because of the passion that he plays the game with. This picture is a little different. Alexei had a very weird stance watching the ball into the catchers glove. I don’t remember the exact circumstances, but I would almost bet it was a bunt attempt. No matter I love the picture, and think it looks good on the card. END_OF_DOCUMENT_TOKEN_TO_BE_REPLACED

If you have a close up picture of a player, and an action picture what can you do with them? You can make a 1983 Topps card that’s what. I have already made two cards from this set, but they were both Twins players. This is the first White Sox card. It is a little rough. I still have to figure out how to properly replace the Topps logo in the upper right hand corner. It is a little rough, but I liked both pictures enough to release it now. This was the first of two years in a row where Topps decided to have two pictures on the card. That makes it a little tougher for me to make cards because I need a close up headshot to make them. END_OF_DOCUMENT_TOKEN_TO_BE_REPLACED