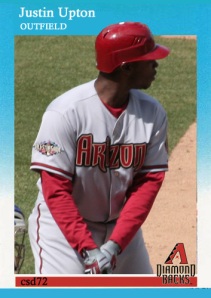 With the Sox playing at Arizona tonight I thought that I would release a couple cards of the D-Backs. Justin Upton is one of the players that I saw playing in A-ball for the local South Bend Silverhawks. He was the #1 pick of the 2006 draft so we knew that he had the potential to be very good. He has started to show that great potential in the Majors. END_OF_DOCUMENT_TOKEN_TO_BE_REPLACED 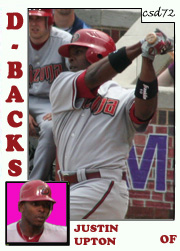 This is yet another card that was made during the ‘snowpocolypse’ while I was snowed in. I was extremely bored so I went through some of my older pictures looking for cards. I loved the 1984 Topps set because it was the first card that I ever collected. The trouble was that I needed a close of up the head for the inset picture. I could only make cards of players that I have seen up close. END_OF_DOCUMENT_TOKEN_TO_BE_REPLACED 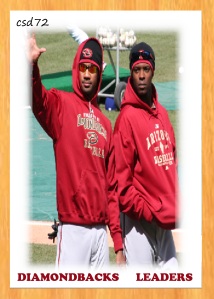 How do you make a card for a team that didn’t even exist for another ten years? I really wanted to try and make one of these cards. I know that there has to be an easy way to do it, but I am still getting used to my new program. I had to use a set of tricks that was way to complex to make this simple card. The outside border was simple. I just used a wood pattern I found on Google images so that I had a fresh grain to work with. I thought it would be easier to start from scratch than to find a suitable card to use as a template. From there I had to make way too much effort for this card. I like how it looks though so when I have more time I will have to find a way to add this effect without overdoing it. END_OF_DOCUMENT_TOKEN_TO_BE_REPLACED

Justin is another big leaguer that spent time in South Bend with the Silverhawks. He came to South Bend as a #1 pick, and had some heavy expectations on him. At first I didn’t think that he was all that great, but he quickly started to show exactly what he could do. He has shown flashes of that in the majors, but still has yet to play like I think he can. If he can do that he will be among the best. END_OF_DOCUMENT_TOKEN_TO_BE_REPLACED

Part of the fun of watching many levels of baseball over the years is the overlap that you get. I watched Craig Cooper play in college. When he came back to South Bend playing in the Minor Leagues he played against Justin Upton who was playing for South Bend. He was such a sure prospect that he was a draw for that season. Last year I went to Wrigley to watch Justin and some of the other former Silverhawks play in the bigs. END_OF_DOCUMENT_TOKEN_TO_BE_REPLACED

Since he has already had two card these last two days I thought that I would put out the regular Justin Upton card. I normally would not put a Major League player on here on a Monday, but he did come from South Bend so he can skate by on Midwest League Monday. END_OF_DOCUMENT_TOKEN_TO_BE_REPLACED

In 2005 the Diamondbacks made history in a couple of ways. They had their first overall selection in the Major League draft. With that pick they took Justin Upton straight out of high school. In 2002 the Devil Rays took B.J. Upton with the second pick making the Uptons the highest brothers ever drafted. When I started out to make these #1 pick cards I only really thought about Harold and Upton. I did not realize all of the players that I had seen that were #1 picks. END_OF_DOCUMENT_TOKEN_TO_BE_REPLACED

Justin will make the list once again tomorrow when his #1 draft pick card is released. He was taken by the Diamondbacks in the 2005 draft as an overall #1 pick. We were fortunate in South Bend to get to see him play for a season before he moved on to bigger and better things. END_OF_DOCUMENT_TOKEN_TO_BE_REPLACED