This card was originally supposed to be released with some ’86 Topps Red Sox cards near the 25th anniversary of that classic World Series. I was not blogging at that time though so hanging onto these cards turned out to be a mistake. I really liked the look of them though so it is nice to be able to release them now.

END_OF_DOCUMENT_TOKEN_TO_BE_REPLACED 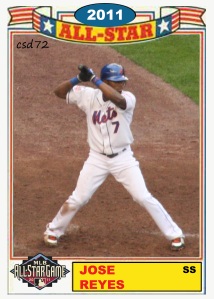 I thought that it was time to post a couple of my All Star cards again. Jose is a player that seems to be on this team every year. He is an exciting shortstop that does pretty well in the bright lights of New York. END_OF_DOCUMENT_TOKEN_TO_BE_REPLACED

The dump of sideways 1989 Upper Deck cards continues with this Jose Reyes card. As I have said before I have too many cards in this set due to the fact I put every picture that would look better sideways on this card. I have to make a couple other templates that will take the sideways picture, but until then I need to clear my computer of some of these. END_OF_DOCUMENT_TOKEN_TO_BE_REPLACED