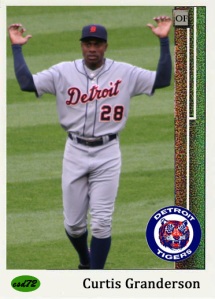 Curtis is one of the good guys in baseball. I have seen him play a few times, and he always seems to enjoy what he is doing. He even takes the time to interact with the fans. He is another guy who just seems to ‘get it.’ END_OF_DOCUMENT_TOKEN_TO_BE_REPLACED 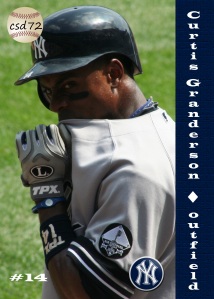 This might be my favorite preview card so far. Last year on Frank Thomas day at the Cell I had some great seats behind the plate. I was a little more to the Yankees side of the dugout so I thought I would get some great on deck pictures. Guys like Jeter hid behind the screen, but Curtis really interacted with the fans behind him. I have never seen that out of a player to that extent. He was fun to watch for sure. I took this picture of him as he was warming up along with a couple more. I really gained a lot of respect for Curtis that day, and he is now one of my favorite players even if he is a Yankee. One visual note about the card. I darkened the sidebar a little bit. On the Andruw Jones card that I threw together I thought it was a little too light. I took one of the colors off of the logo to make it look a little better. Another thing that I like about this card is the fact that you can really read the patch the team wore for Bob Shepard. Things like that I try to include on pictures because they add some context of time to them. I just really like the picture can’t you tell? END_OF_DOCUMENT_TOKEN_TO_BE_REPLACED 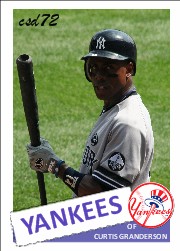