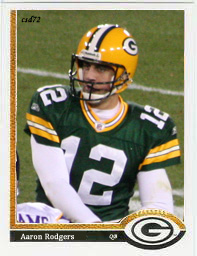 For the final card tonight celebrating the one year anniversary of the Packers Super Bowl win I thought that I would post this card of the Super Bowl MVP from last year. Aaron is a fun player to watch, and he really makes losing Brett Favre very bearable. Who would have thought that someone could come in and exceed what Favre accomplished? Aaron has done that and then some. END_OF_DOCUMENT_TOKEN_TO_BE_REPLACED 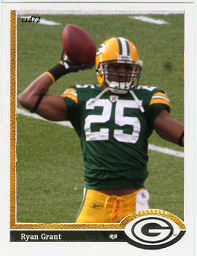 I know that he wasn’t on the active list this season, but the Packers have a very good running back in Ryan Grant. I decided that I couldn’t just leave out players just because they weren’t playing in the Super Bowl. This is my card set, not a team picture. As with the other cards in this Packer set I have taken an actual Packers card from the past, and modified it for my own purposes. In this case I took the 1991 Upper Deck Tony Mandarich card, and cut out the picture and changed the name and position. END_OF_DOCUMENT_TOKEN_TO_BE_REPLACED