The last card of the day is the ’89 Hoops card of E’Twaun Moore. He was selected by Boston with the 55th pick overall in yesterday’s NBA Draft. I love the fact that he will still be a teammate with JaJuan Johnson. END_OF_DOCUMENT_TOKEN_TO_BE_REPLACED 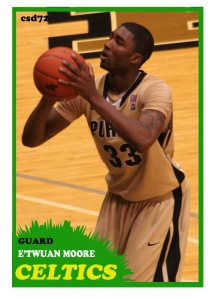 Since I made an ’81 Topps card for JJ I thought I would make one for his former and current teammate E’Twaun Moore. I liked the real card from the set so it was only natural that I would try these for the two new members of the team. END_OF_DOCUMENT_TOKEN_TO_BE_REPLACED

Smooge has been very fun to watch during his time at Purdue. He may have never gotten the accolades of the other players in his class, but he has sure produced. He will leave the school as the #2 scorer ever with an outside shot of taking over the #1 spot. Barring overtime or something crazy this should post about the time E’Twaun is being recognized after the game. END_OF_DOCUMENT_TOKEN_TO_BE_REPLACED

With Purdue starting a big game right now against Michigan State I thought that I would post this card of E’Twaun. I originally wanted to make a card for him becoming the fifth player in Purdue history to eclipse the 2,000 point mark. I made this base card first before putting the ribbon on it for the 2,000 point mark. I liked it so much plain that I decided to post it both with and without the ribbon. END_OF_DOCUMENT_TOKEN_TO_BE_REPLACED