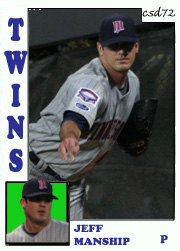 While looking at some of the ’84 Topps cards that I had already made today I saw one of former Notre Dame hurler Jeff Manship. I have been meaning to release the card, but for some reason I never did. Last night he was part of a combined no-hitter for the Twins Triple A team in Rochester. He started the game, and it is great that he gets some publicity. Jeff was part of the great staff in 2006 for the Irish that also included Tom Thornton and Jeff Samardzija. END_OF_DOCUMENT_TOKEN_TO_BE_REPLACED

Jeff was one of three very good pitchers on the 2006 Notre Dame staff. Tom Thornton was one of them who now pitches in Independant ball. His other counterpart Jeff Samardzija now is a relief pitcher for the Cubs. Manship has been trying to make his way onto the Twins roster for the last couple of seasons. END_OF_DOCUMENT_TOKEN_TO_BE_REPLACED

Jeff was part of the awesome pitching staff the Irish had in 2006. He was the Saturday starter which in the Big East is usually the best pitcher on your team. I did not get to see him pitch as much in college as I would have liked to because I was usually watching Jeff Samardzija on Friday nights. He was drafted by the Twins that same year, and has worked his way up to Triple A Rochester. He is probably the sixth starter on the Twins roster getting called up any time a scheduled pitcher cannot make a start. END_OF_DOCUMENT_TOKEN_TO_BE_REPLACED