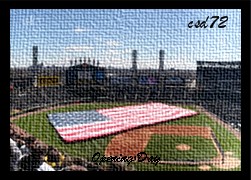 Just one card today on the site. I made this card early on in the process when I was trying to make some cards that resembled the Upper Deck Masterpiece cards. Early on I thought that it might be the design for this year’s set so I didn’t make any more than three. For some reason I never got around to releasing this one until now. END_OF_DOCUMENT_TOKEN_TO_BE_REPLACED

Andruw quickly became one of my favorite players on the team when I was finally able to watch him play in person. His swing to me became a focus with my camera. It is so big and sweet that I love taking pictures of it. What better player to have a second card of in this set? END_OF_DOCUMENT_TOKEN_TO_BE_REPLACED

One of my favorite all time sets have been the Masterpiece sets that Upper Deck has put out the last couple of years. I love the cards because they show the field as I see it. Upper Deck took baseball card photography to a new level to make each card a piece of artwork. This was my first attempt to re create these cards. If I like how the cards look I may try and make a few of the Sox players in addition to the 1985 Topps replicas. END_OF_DOCUMENT_TOKEN_TO_BE_REPLACED