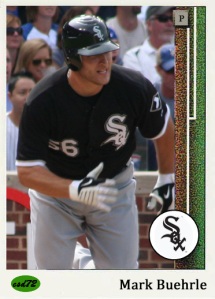 The final card of Mark today is one of my favorites. As luck would have it I came across a free ticket to a Cubs-Sox game in 2009. Of course as per usual Mark was pitching. Being in a National League park though it also meant that Mark would get some at bats. I always thought that Upper Deck really changed things up when they started by showing some things that were out of the norm. I think that Mark running to first with his batting helmet on was a perfect fit for this card. END_OF_DOCUMENT_TOKEN_TO_BE_REPLACED

This is a card that I have had made for quite some time. I like how it looks for the most part, but was waiting to make a regular issue ’82 Topps card to release it. I have learned quite a bit since making the card, but I still like how it looks. The card will now see the light of day as part of the Mark Buehrle day on this blog today.  END_OF_DOCUMENT_TOKEN_TO_BE_REPLACED

Today I thought I would get rid of the rest of the Buehrle cards that are sitting in my completed folder. I have not made a card for a while, but I have so many sitting around that this blog could go on for a while if I never made another card. With Mark Buehrle leaving the White Sox I thought that I would put out the rest of my completed cards of one of my favorite players. I am sure that I will try and see Mark pitch next season to get a couple new cards of him in a Marlins uniform.  END_OF_DOCUMENT_TOKEN_TO_BE_REPLACED

The hardest news of the off season was that Mark Buehrle would not be coming back to the White Sox next year. Early on you knew that it was the case, but you kept thinking that maybe another ‘all in’ miracle would happen like last year. It did not, and Mark went to play with Ozzie in Florida. I quit watching baseball after the strike in ’94. When I came back to the game Mark was a young pitcher for the White Sox. His love of the game quickly made him a favorite of mine. He is now on another team, but I think that he will forever be remembered as a member of the White Sox. Will he end up bronzed in the outfield? I struggle with that question. If he is I will be there though. END_OF_DOCUMENT_TOKEN_TO_BE_REPLACED

I have really enjoyed looking at the ’83 Topps cards over at A Hair Off Square. I asked him if I could borrow his ’83 Topps black template and he obliged. For some reason I cannot make a good one, and he had one that he was already using. I thought that I would make a card with it tonight since it is raining outside. END_OF_DOCUMENT_TOKEN_TO_BE_REPLACED 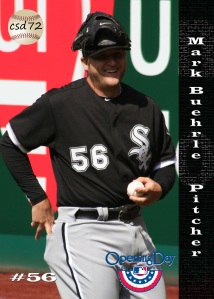 Now only a few months late is another of my Opening Day cards. I liked the idea of this set, but I had way too much going on to give it the attention that it deserved. So instead of it going out when it should have I think the cards will just trickle in as I continue to make them. END_OF_DOCUMENT_TOKEN_TO_BE_REPLACED

I have put out a few ’87 Topps cards lately so I thought that I would go back ten years, and post a ’77 Topps card. For some reason I really like this card. Maybe because it is so easy to put my picture on them and complete the process. I don’t know why, but this is a great card. END_OF_DOCUMENT_TOKEN_TO_BE_REPLACED