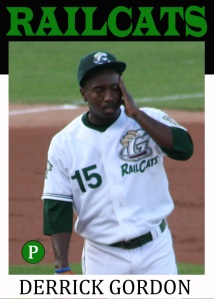 I have been to four Railcats games this season and Derrick has started three of them. The last game I saw he got the win despite a shaky first inning. That will be the last time that I see him in a Railcat uniform though. He was traded yesterday for a local arm. The player they received is from my area so I can’t complain, but I thought that I would get some cards out for Gordon since I enjoyed watching him pitch. END_OF_DOCUMENT_TOKEN_TO_BE_REPLACED

As I said in the previous post I have seen Derrick pitch three times in this young season. Now that he is traded I have a shot at seeing someone new on the mound. He had a style of pitching that really seemed to work well on film. I guess I will have to find someone else to shoot as the season goes on. END_OF_DOCUMENT_TOKEN_TO_BE_REPLACED 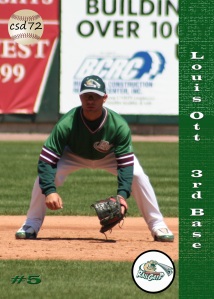 This will be the first of probably two cards in this set for Louis. I saw him play in an exhibition game for the Railcats before this season started. During the first series of the season on the road he was traded to Winnipeg. The Goldeyes had a need for a third baseman after Amos Ramon (who is already in the set) went down with an injury. As I said in the previous post Louis is very versatile, and can play any position in the field. He will be missed in Gary. As I said to start this off I will probably make two cards of Louis in this set. When he comes back to Gary as a Goldeye I will have to get a picture of him to put in the set. END_OF_DOCUMENT_TOKEN_TO_BE_REPLACED 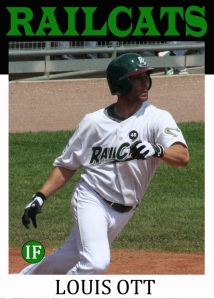 Minor League Monday starts off with a former Railcat. Last season I had fun watching Louis Ott playing almost any position on the diamond. He was a super utility man. On Sunday I was a little behind the times when I saw that Louis had been traded to Winnipeg for cash and a player to be named later. I was a little disappointed to say the least. I think that I saw him play every infield position last season including catcher. For some reason I missed him pitch. I would have liked to have seen that. So in order to play a little catch up I am posting this card of Louis now so that I can post my 2011 custom of him. END_OF_DOCUMENT_TOKEN_TO_BE_REPLACED

As I said on the previous card Cody was traded today as part of the roster cuts that brought the Gary Railcats roster to 23 players. I saw him play last week for Gary though so I thought he should get a card in the set. END_OF_DOCUMENT_TOKEN_TO_BE_REPLACED

I don’t know what card I will use for the Railcats players yet as I make their set. I had this ’83 Fleer template that I had not used yet so I thought I would try it out. Cody was one of the players that I had not seen before that was playing for the Railcats last week. Today he was traded as part of the last minute roster moves that Gary had to perform to get to 23 players. He will now be playing for the Edinburg Roadrunners of the North American League. END_OF_DOCUMENT_TOKEN_TO_BE_REPLACED

Mike has been with Gary for some time now. His hit in the 14th inning of my first game last season at the Steel Yard won the game. The opposing teams right fielder tossed me up the ball, so I have the game winning ball from the longest Railcats home game. For that reason Mike will always hold a special place for me. This is my second American Association card, and the first Railcats card. END_OF_DOCUMENT_TOKEN_TO_BE_REPLACED