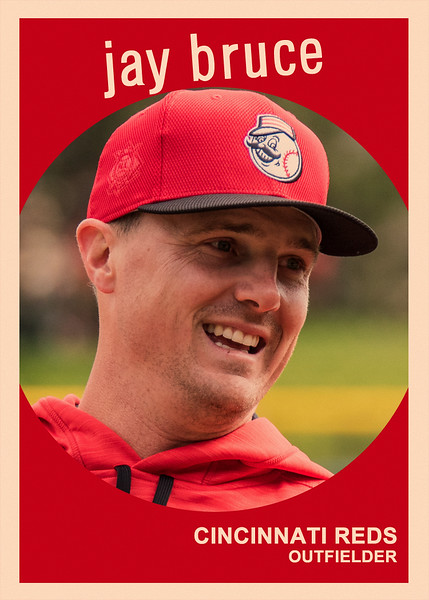 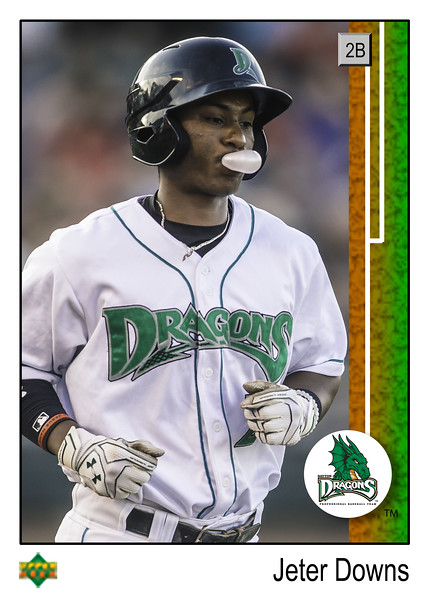 It is funny how some things work out. I was watching the Ohio State – Miami title game in football from a couple of years back when Jarett Payton was the running back for the Hurricanes. I thought that another Hall of Famer had a son that played for Miami, but then thought that Barry Larkin was not in the hall yet. Not an hour later I heard on TV that Barry was elected today into the Baseball Hall of Fame. I had this card sitting around so I thought that today was the perfect day to post it.  END_OF_DOCUMENT_TOKEN_TO_BE_REPLACED

I was never too sure exactly what I thought of Brandon until I saw him play in 2009. As one of the bigger names on that Reds team you would have thought that he would have had a bigger head. Instead of hanging out in the clubhouse before the game he spent most of that time signing as many autographs as he could. That put him on my list of players to watch, and got him a couple of extra cards on this site. END_OF_DOCUMENT_TOKEN_TO_BE_REPLACED

One of the great things about this set is that I get to make a card of Tom Seaver. I have an unwritten rule that I can only use my pictures for cards. That makes it very hard to get some players on a card. This set allows me to make cards of players that I admired growing up, but do not have any pictures of. Tom is one of those guys. I loved watching him pitch for the White Sox, and every August I relive his 300th win. In honor of that I thought it would be the perfect time to put this card up on the site. END_OF_DOCUMENT_TOKEN_TO_BE_REPLACED

Over the next couple of months I am sure that a few cards of Corky will show up on this site. He just has a look that makes me want to make a few 70’s cards of him. I had the nice close up picture of him though so I thought I would take my first crack at the ’54 Topps card. This is another card that I made from scratch. From now on I would like to do that whenever possible instead of altering an existing card. It gives me a little more freedom to make things how I want them. This card looks a little off for some reason to me. I may have to tweak the design when I try this card again. END_OF_DOCUMENT_TOKEN_TO_BE_REPLACED

Somehow last season I forgot to post a Famous Lineage card of James. His father Jeff played in the big leagues when I was a kid. I am glad that I waited so that I could post this card now. I fixed this template a bit since last year so I think that I have made it look a little better this season. END_OF_DOCUMENT_TOKEN_TO_BE_REPLACED

On my train ride Wednesday to the Sox game I was finishing the book Roger Kahn wrote about Pete Rose called “My Story.” Most of the book dealt with his great career, but the end dealt with the ban that was imposed on Pete. I still hate that he lied about betting on baseball, but I am sure he wishes that he could do that over as well. I really enjoyed watching Pete play as a child. He was already past his prime when I saw him play, but you could still see the passion with which he played the game. I would love to have seen him in his prime. I never saw him play in person, but did see him on TV whenever I could. I still think he should be in the Hall of Fame. If these juicers can get in, then Pete should be in. END_OF_DOCUMENT_TOKEN_TO_BE_REPLACED

Three cards left in the 2010 custom set. Johnny has a lot going for him. I like catchers so he fits that mold. He was a hard nose player so he has an in there. He also hosted the Baseball Bunch when I was a kid so I got to see him every week. That was one of my favorite shows as a kid. Right then people should have known that I had a sports problem. END_OF_DOCUMENT_TOKEN_TO_BE_REPLACED 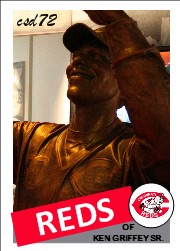 Before ‘the Kid’ was a household name his father was helping the Big Red Machine win World Series titles. While those are great stories my favorite story of Ken is the back to back homers he hit with his son while playing in Seattle. Ken Sr. came up and hit a dinger. Just following your father in the lineup has to be a thrill. His son then probably at his peak jacked one. A historic moment, but I am sure one that every father and son wishes that they had. END_OF_DOCUMENT_TOKEN_TO_BE_REPLACED 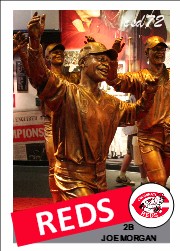 I was leary about putting Joe in the set because then he would say that he didn’t belong in the same set as Ryne Sandberg. I do respect how Joe played the game so I decided to take my chances and put him in. END_OF_DOCUMENT_TOKEN_TO_BE_REPLACED 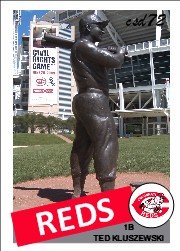 The Big Klu makes the set. This is the last of the statues from Crosley Terrace that made the set in the ‘short print’ capacity. I had a card with Frank Robinson on it, but it was a picture of the actual man that I had taken on the same day. END_OF_DOCUMENT_TOKEN_TO_BE_REPLACED 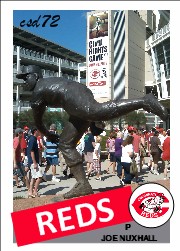 This is another statue that can be found in the Crosley Terrace section outside of the Great American Ballpark. I love this picture because of the Civil Rights Game signage in the background. I did not grow up around Cincinnati so I never was able to hear Joe on the Reds broadcast. I did learn of him at an early age when they had a feature on him in one of the baseball card magazines I used to read. END_OF_DOCUMENT_TOKEN_TO_BE_REPLACED

I think one of the coolest facts about Ernie is that he caught back to back no-hitters. As rare as the gem is I am sure that the number of catchers that have caught them have to be just as rare. Johnny Vander Meer threw no-hitters in back to back games, and Ernie caught both of them. END_OF_DOCUMENT_TOKEN_TO_BE_REPLACED

This is a first for this set…and blog for that matter. Harry died ninety years before the 1985 Topps set came out. I became intrigued about this player after reading a book by Darryl Brock called “If I Never Get Back.” The book was about a man who goes back in time, and ends up playing for the first professional team in Cincinnati. The book has a sequel which is not as good, but they are both solid reads. END_OF_DOCUMENT_TOKEN_TO_BE_REPLACED 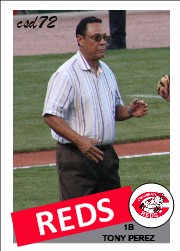 This is another card that was part of the 2010 set that I have yet to release. I have decided that I will just release them all in the next couple of weeks. I did go through the trouble of making them so why not? END_OF_DOCUMENT_TOKEN_TO_BE_REPLACED

Yet another picture from the Civil Rights game. Because of the uniforms that both teams had on I took about as many pictures as I do now that I know I will be making cards out of them.  I liked the ’88 Score design so much that I made my own cards from scratch. Now that I have changed programs I don’t know what will become of these cards. I may have to just make some new templates to work from. END_OF_DOCUMENT_TOKEN_TO_BE_REPLACED

I thought I might just make a day out of my preview set. I always liked how the Opening Day set got the fans ready for the regular issue set. This preview set is a way to try out each teams cards ahead of time. I have been working on templates for the different teams so that when the regular season starts and the pictures start flowing in I can just make the cards. I have already had a few Reds players in this set. I think that has something to do with the uniforms they wore two years ago when I saw them play. I really liked them so I took a few extra pictures of the away team. That being said they have a few new players that I would like to have in the regular set this season. I need to get to a Reds game this summer. END_OF_DOCUMENT_TOKEN_TO_BE_REPLACED 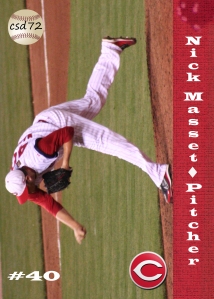 I have been away for a while so I need to get caught up on the 2011 csd set. Tonights card is of Nick Masset. Nick was a member of the White Sox before going to the Reds in 2008 as part of the Ken Griffey Jr. deal. I took the picture on the front of the card in 2009 at the Civil Rights Game. For some reason I am on a Reds kick today. I had two Reds cards made along with a few Cubs cards, but I already have way too many more Cubs cards than Sox cards so far. I will hold onto the Cubs for a while while I make some Sox cards. END_OF_DOCUMENT_TOKEN_TO_BE_REPLACED

I found this picture last season while going through some older ones for the 2010 set. I was mad that I couldn’t use it because Jerry was no longer on the Reds. When I decided to just make some cards for fun no matter what team the player was on that opened the door for me to get it on a card. My first thought was the 1988 Score set, and when I centered the picture on the card it seemed to work. END_OF_DOCUMENT_TOKEN_TO_BE_REPLACED 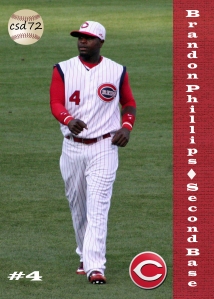 As I was making these cards yesterday I noticed that both Brandon and Grady were in the Expos organization at the same time. They were both traded to the Indians along with a bunch of other players including Bartolo Colon. As iwith all the Reds cards in this preview set, and for that matter on this site so far the picture was taken at the 2009 Civil Rights Game. I really liked the throwback unis so I took a few pictures. This is one of Brandon before the game getting loosened up. END_OF_DOCUMENT_TOKEN_TO_BE_REPLACED

Before the season starts I would like to make at least one card from every team. I really only have pictures from one Reds game to choose from. That was the 2009 Civil Rights Game against the White Sox. I always liked the way the pitchers and catchers walk in from the bullpen prior to the game. This picture was taken during that walk. I really like how the set is starting to look. As I make different teams I am getting more and more confident that this is my design for this season. The only difference on the front on this card was that I shrunk the players number down. END_OF_DOCUMENT_TOKEN_TO_BE_REPLACED