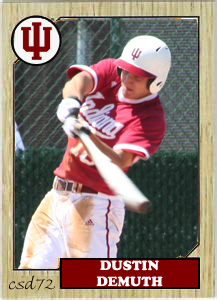 Dustin was a fun player to photograph last spring. I had watched him play football for my hometown team, but had not seen him play baseball yet. I am a Purdue fan, but I did root for Dustin (who plays for the hated Hoosiers) when he came to bat. I was lucky enough to see a couple games that weekend so Dustin has had a few cards made from them.  END_OF_DOCUMENT_TOKEN_TO_BE_REPLACED

Since I was going to make a few cards of Dustin I thought that I would try one from his birth year. It really makes you stop and think when you are making birth year cards that are on the edge of when you quit collecting. Maybe I should stop doing this because it is making me feel old. I always liked this design so I thought I might try and make a few of them. What better players to use than some of the players in this weekends big series in West Lafayette? END_OF_DOCUMENT_TOKEN_TO_BE_REPLACED

Dustin was a player that I watched play football for my hometown high school team for four years. Needless to say as a Purdue fan I was a little disappointed when he signed with Indiana to play baseball. He was part of the draw of attending the games this weekend. This is the first of five Hoosier cards that I plan to have in this set. It pains me to make that many cards of a rival school, but each card has a reason for being in the set. END_OF_DOCUMENT_TOKEN_TO_BE_REPLACED 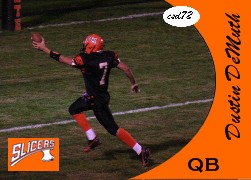