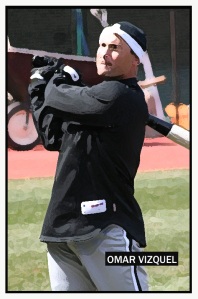 I have been toying with the idea of making cards from 1950-the present day. I think that it might be a winter project, but that doesn’t mean I can’t try a new card every so often. While going through some pictures from Opening Day for my ’11 set I found this one of Omar. While I kid that he could have been playing back then I thought that it just looked like a pose from a classic card. That turned into finding a template to try it on. I found the ’51 Bowman template, and decided to give it a try. END_OF_DOCUMENT_TOKEN_TO_BE_REPLACED