With the Packers opening up the playoffs tonight I thought that I would post a few of the Packer cards that have sitting in a folder since that Pack won the Super Bowl in 2011. Aaron Rodgers was really the focus of the cards that I made at that time. Being the quarterback and having the ball as much as he does of course I had the images to make cards with. Add to that the fact that he is the star of the team, and you have a bunch of cards for the All Pro.

For the final card tonight celebrating the one year anniversary of the Packers Super Bowl win I thought that I would post this card of the Super Bowl MVP from last year. Aaron is a fun player to watch, and he really makes losing Brett Favre very bearable. Who would have thought that someone could come in and exceed what Favre accomplished? Aaron has done that and then some. END_OF_DOCUMENT_TOKEN_TO_BE_REPLACED 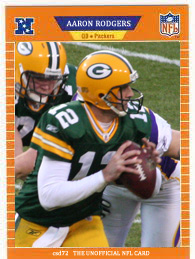 What would it be if I did not post a Packer card during the day. I still have a few of these so they will just keep popping up for a while I guess. I was going to just post all Packer cards, but I think that would get too boring. This card really reminds me of a card from back in 1989. I haven’t gone through my old cards yet, but it has to be someone. END_OF_DOCUMENT_TOKEN_TO_BE_REPLACED

This was the first Packers card that I made after the Super Bowl. I have always liked this set so I thought I would try and make a card from it. I liked it so much that the other ones just sprung up. I basically took a card from a Packer Pro Bowl player and doctored it a little. Instead of the Pro Bowl line I changed it to Super Bowl MVP. The only problem is that I can never seem to get angled text to look right. It was an issue that I fought all of last year making the 1985 Topps tribute cards. END_OF_DOCUMENT_TOKEN_TO_BE_REPLACED 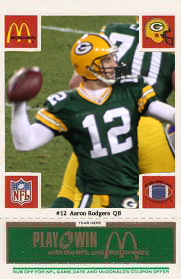 This site may shift gears for a couple of days. I love to make baseball cards, and I have had no success with football cards. I tried to make two custom sets that did not look good in my eyes. With the Packers winning the Super Bowl last night I decided to just take some Packer pictures that I had and put them on older cards. I had some good results doing that. This week I will still be issuing my preview set for baseball, but I will sprinkle in a few Packer cards. END_OF_DOCUMENT_TOKEN_TO_BE_REPLACED

The last card in this set is fittingly of Aaron Rodgers. Much was expected of him when he took over at quarterback for Green Bay. Following a legend is never easy, but Rodgers has done it with class. He is also a very good quarterback who has now led his team to the Super Bowl. END_OF_DOCUMENT_TOKEN_TO_BE_REPLACED

I guess if I post a Brett Favre card today I had better be fair and post an Aaron Rodgers card. I never thought anyone could live up to Brett, but Aaron has done a great job so far. He is quickly making Packer fans forget their old hero. END_OF_DOCUMENT_TOKEN_TO_BE_REPLACED