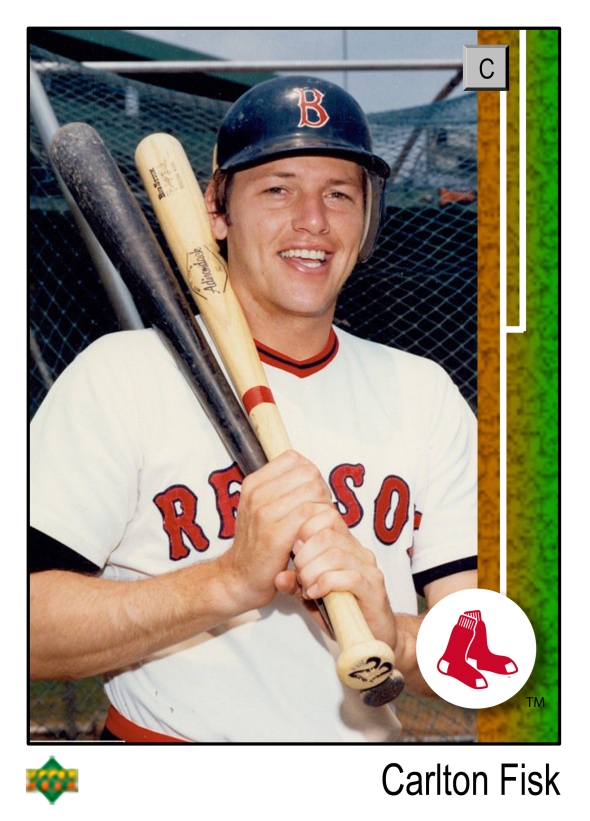 Carlton had a White Sox version of this inaugural Upper Deck set so I thought that I would see what a Red Sox version would look like. 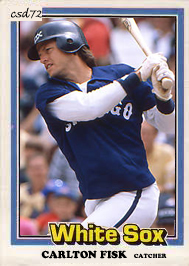 Part of the fun of freeing myself from having to use my own pictures on certain cards is the fact that I can go back and make cards that should have been made. Carlton Fisk signed with the White Sox in March of 1981 so the card companies did not have the proper time to make a White Sox card of the catcher. All three companies featured him as a member of the Red Sox in their 1981 base sets. Topps gave Carlton a White Sox card with their traded set, but the other two companies were probably more worried about year two of their brand than updating cards at the time. I decided to see what a White Sox Donruss card of Carlton END_OF_DOCUMENT_TOKEN_TO_BE_REPLACED 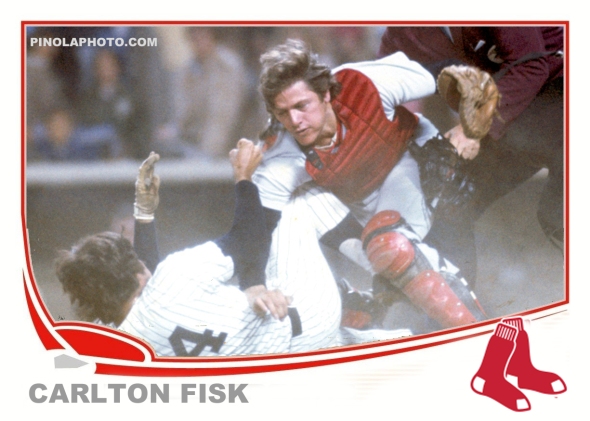 I have already made two versions of this card for Carlton, but I thought a third could be used. I had threatened to make a card with Carlton as a member of the Red Sox, and I did just that. I like some of the older pictures of Pudge with the Red Sox so I will have to find a way to work them into this subset that I plan on making. I have found some using a Google image search, but many of the great older pictures are on sites like Getty Images. I will have to find a good source before I continue the Red Sox portion of this side project. In this particular picture Carlton is tagging out Lou Pinella just before their epic battle. Carlton had many great moments showing his dislike for the Yankees, and this is another of those. 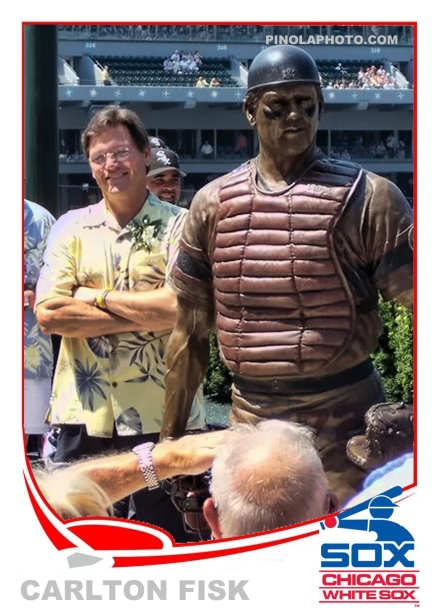 Here is another version of the 2013 Topps card that I have made. This would be part of my custom set though meaning that it has to have one of my pictures on it. I love the idea of my pictures on cards so why not. I took this in 2005 as Carlton was getting his statue unveiled before a White Sox season. That year was a special year, and this was just another great moment during it.  END_OF_DOCUMENT_TOKEN_TO_BE_REPLACED 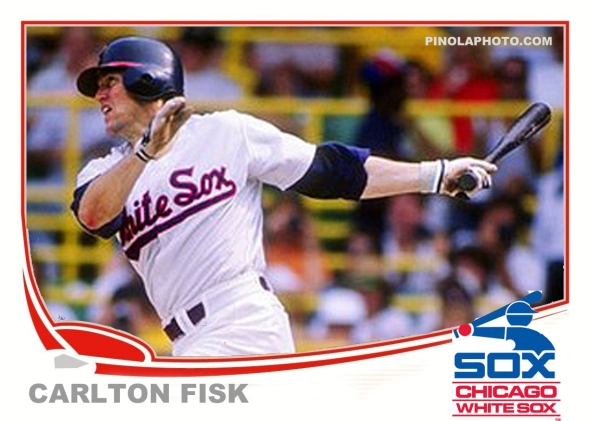 Whenever I have made a custom set I have included Carlton Fisk in it. I have always made it a point to include my own pictures as I do all of my cards. Today I thought that I might try something new. Inspired by Dick Allen Hall of Fame I decided to try and recreate what some cards would have looked like had Carlton been playing today. He has done some great things with Dick Allen through all the Topps years, and is now reworking through Mike Schmidt’s career. Click on the link above, or on the sidebar to see some of his great work. In addition to this card I also have a 2013 Topps card made with a picture that I took on it. I will post that card tomorrow.  END_OF_DOCUMENT_TOKEN_TO_BE_REPLACED 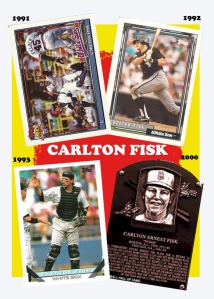 Here is the final card in the mini set that I created to cover the career of Carlton Fisk. One day I was bored thinking of ideas for custom cards. Normally a card has to have a picture by me to be on this site. Carlton was my favorite player, and after seeing the set that Topps did for Pete Rose in 1986 I decided to make my own. It was a fun idea that I have since copied for Gary Carter upon learning of his passing. I may bring this back in the future for some of my other favorite players. Those will be weird though as some of them weren’t born yet in 1986. END_OF_DOCUMENT_TOKEN_TO_BE_REPLACED 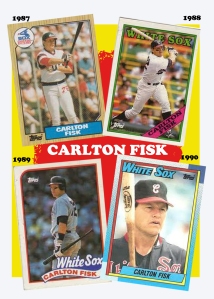 Here is the second to last card in this mini set that I created. Since it is Carlton Fisk’s birthday today I thought that it would be a good day to finish this set off. It was created a while back, and since this blog has sort of fallen off the map it has never been finished. The cards have just sat in a folder on my computer. Today that will end.  END_OF_DOCUMENT_TOKEN_TO_BE_REPLACED 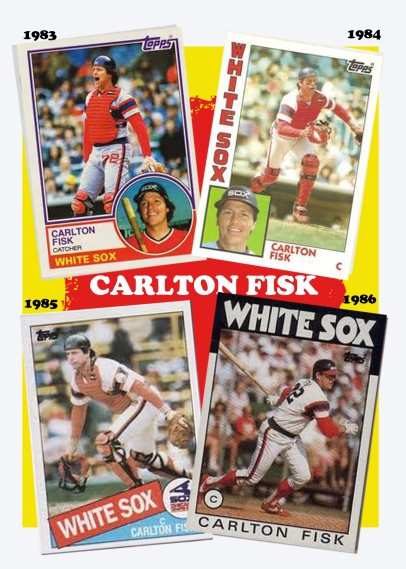 I have been away for a while, but I figured that today would be a great day to post the rest of my Carlton Fisk career highlight cards. These were done in the style of the 1986 Topps Pete Rose career highlight cards. I had a lot of fun making them, but for some reason I have been slow to release them. When Gary Carter died I paid tribute in a similar fashion, but actually posted all of the cards. I guess I will have to use this excuse to post the rest of the Fisk cards today. END_OF_DOCUMENT_TOKEN_TO_BE_REPLACED 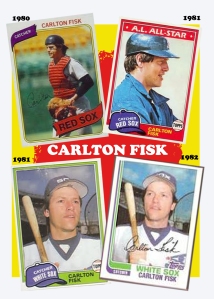 Here is yet another card in the mock Carlton Fisk tribute that I made up. This card might not have been made yet if not for the Gary Carter tribute set that I made upon learning of his death. It was with that set that I made the decision to leave out the All Star and other special cards in order to keep things running a little better. I did include the ’81 Topps traded card of Carlton though. He did play for the White Sox in ’81 so it had to be there. Where things would have started getting tricky was in 1982 with the In Action and All Star cards that Topps put out. I think that for now those were best left off of the card.  END_OF_DOCUMENT_TOKEN_TO_BE_REPLACED 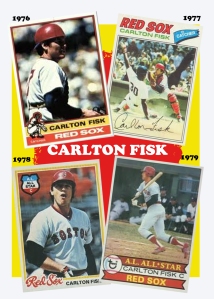 Just before I quite making cards I had this great idea to make a set much like the one that Topps did for Pete Rose in 1986. They took all of his cards and put the in sets of four to have a career spanning set. This is the second card of that set spanning the years 1976-1979. From here I have some decisions to make concerning the cards. If I don’t put any of the special cards or all star cards on the cards it will work out very nice. In my opinion though those cards are very important. I want to place them on the cards as well. I also toyed with the idea of adding Fleer and Donruss into the mix initially, and then Upper Deck and the others later. Of course things would get very confusing late when all the companies jumped into the mix. For now I think that I will keep things to just Topps. Later I might add some cards with just Donruss or just Fleer. I will at least make the next card in this set before deciding how to proceed.  END_OF_DOCUMENT_TOKEN_TO_BE_REPLACED 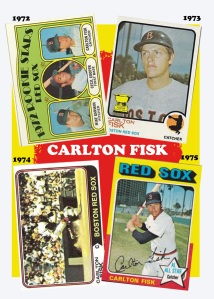 Part of the fun for me with this blog is going back and re-creating the cards that I loved as a child. For the most part I have taken my pictures and put them on the templates from pre 90’s cards. One of the cooler sub sets that I can remember from the 80’s was the Pete Rose tribute set that Topps put out in 1986. They had all of his base cards in a six card set. Of course I had to try and re-create this set. I was going to use some cards of Paul Konerko that I had made. To get that going though I would have to creat a couple of new ones to start. Instead I thought about how cool it would be to just make this set for my favorite player as a child, Carlton Fisk. I have only made the first card so far, but I like how it turned out. It might be a while, but I plan on finishing this small mini set. END_OF_DOCUMENT_TOKEN_TO_BE_REPLACED 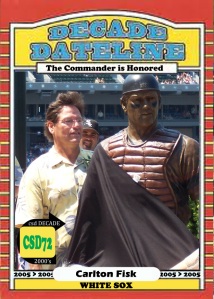 I thought that since the White Sox were unveiling the statue of the Big Hurt tomorrow I would make a card from the last time I was at the ballpark to see a statue unveiled. Of course it was of Carlton Fisk. I altered the Upper Deck card a little to  make it my own. END_OF_DOCUMENT_TOKEN_TO_BE_REPLACED 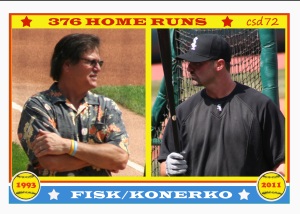 Watching the Sox game tonight I saw Paul Konerko hit a home run over the Green Monster to give the White Sox a 3-1 lead over the Red Sox. The home run was important because it was the 376th of Paulie’s career. That tied him with Carlton Fisk for 66th all time. This is important to me because two of my favorite players of all time are now linked for what I hope is a very short period. The event inspired me to make my first card in quite some time. I thought that I would post it right away so that others could enjoy it. I posted the card as a 1983 Topps because I just basically tweaked my ’83 Topps Super Veteran template to make the card. END_OF_DOCUMENT_TOKEN_TO_BE_REPLACED 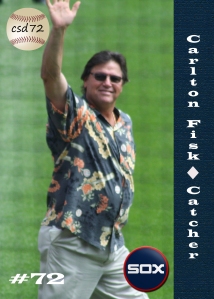 A set just wouldn’t be a set on here until the Fisk card was added to it. I was going to add this card first, but I decided to release the Jackie Robinson card first Friday. It just seemed like a good way to kick off the set. The set can really get going now that my favorite play has been released. END_OF_DOCUMENT_TOKEN_TO_BE_REPLACED 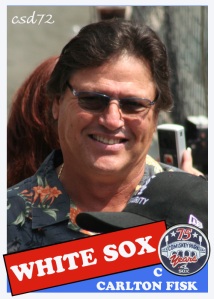 As I have said in previous posts this set was meant to commemorate the 25th anniversary of my first Major League game. I celebrated that all last season using it as an excuse to go to many games. That is how this whole custom card thing got started as well. I was just messing around putting my pictures on the ’85 Topps template, and it just took off from there. Of course in coming up with a 25 card set for my 25th anniversary I had to include Carlton Fisk. I met him along with Richard Dotson during that first game, and Fisk has been my favorite player ever since. I didn’t know that he would be a Hall of Famer then. I just knew that he was this cool guy who talked to me and signed my program. END_OF_DOCUMENT_TOKEN_TO_BE_REPLACED 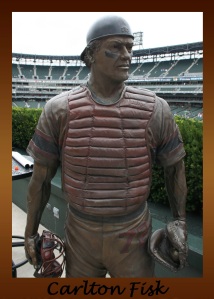 Here is a small set that I have started. I realized that I have a crazy amount of pictures of statues that I have acquired through my travels. It is a simple design that is meant to have you focus on the statue instead of the card. Of course the first card should be of Pudge. He was my favorite player as a kid. I was at the park when this one was dedicated. I may put one of those pictures on a future card. I just thought he would be the best card to kick this set off. END_OF_DOCUMENT_TOKEN_TO_BE_REPLACED 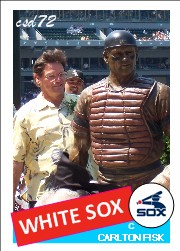 Everyone had to know that this was coming didn’t they? Topps has #7 in each set saved for Mickey Mantle. I wonder what I will do in my set. Was there ever any doubt that the #72 card would be Carlton Fisk? And we get a special surprise here. The card is actually of two Carlton Fisks. One is the man, and the other is the statue. I chose to post this card today because as I have said many times on my blogs today is the 25th anniversary of my first baseball game. It is the reason for the cards being 1985 Topps, and the reason I decided to do this. I have already decided that every card that is a #27 or #72 will be a catcher that I like. Many of those cards you have already seen on the site. END_OF_DOCUMENT_TOKEN_TO_BE_REPLACED