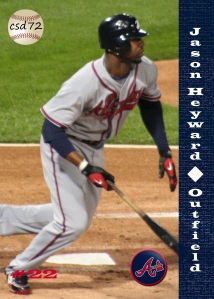 Jason is one player that many people will be watching this season. After a very good rookie season he will be expected to do the same again this year. He came into the league with a lot of fanfare being ranked as the #1 overall prospect before the season started. Hitting a home run in your first at bat will do nothing but raise those expectations. END_OF_DOCUMENT_TOKEN_TO_BE_REPLACED 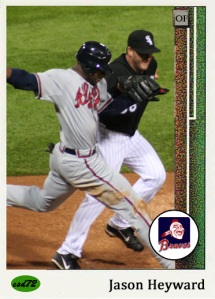 What player could have rivaled Griffey in hype since his 1989 rookie card? I was have to say Jason Heyward would be up there. Strasburg had the hype, but was hurt too quickly for it to build. Heyward started strong, made the all star team, and then helped his team make the playoffs. He was listed as the #1 prospect in baseball prior to the season, and showed us why. END_OF_DOCUMENT_TOKEN_TO_BE_REPLACED

The final ’88 Donruss card of the day is of the J-Hey-Kid Jason Heyward. I don’t know that any rookie had the hype that Jason had last season. He was the #1 prospect coming into the season. He backed that up by hitting a 475 ft. home run in his first at bat off Cubs ace Carlos Zambrano. He was elected to the All Star game as a rookie, and really had a fine season. END_OF_DOCUMENT_TOKEN_TO_BE_REPLACED 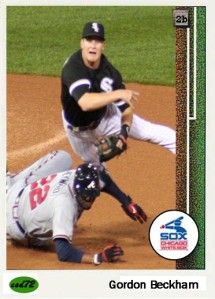 Gordon was one of the most exciting players on the team last season. He is a fan favorite, and that is why I thought it would be fitting to make him my first try at a 1989 Upper Deck card. I cheated a little on this one. The other cards I made from scratch, but this one I used a scan of a card, and altered it from there. I knew that there was no way I was going to be able to re-create the first baseline on the right side of the card. I think that it turned out good, and I can’t wait to make a couple more. END_OF_DOCUMENT_TOKEN_TO_BE_REPLACED

Jason is one of the top prospects in all of baseball. Can you even call him a prospect at this point? Going into the season he was considered the #1 prospect in baseball by many organizations. He made the Braves club out of spring training, and hit a three run home run in his first ever Major League at bat. Talk about raising already high expectations. He was named the rookie of the month for both April and May. He is on his way to being a superstar. END_OF_DOCUMENT_TOKEN_TO_BE_REPLACED