Tonight I thought that I would finish up this small spree of local players with Brad Mumma. Brad made it the farthest of any former Slicer that I have seen in person. He spent time with the Double A affiliate of the Toronto Blue Jays. I took this picture a couple of years ago as Brad was pitching for the Joliet Jackhammers.  END_OF_DOCUMENT_TOKEN_TO_BE_REPLACED 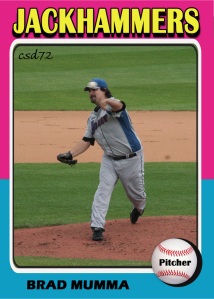 Are you sick of the ’75 Topps cards yet? I am not. I have had some fun coming up with a few different color variations with this card. I thought that I would include a hometown player in this set. Brad was a star player for the LaPorte High School baseball team before his pro career. He never made it above Double A, but it is still cool to see a local kid do well. END_OF_DOCUMENT_TOKEN_TO_BE_REPLACED 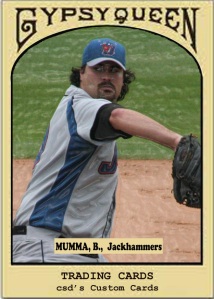 I enjoyed making a few cards with the Gypsy Queen template. I didn’t want to use players who could be in the set so I branched out to find some players who I thought would make interesting subjects for these cards. Brad Mumma was a local ballplayer who had a decent pro career. He never made the majors, but was a solid pitcher. He is from my hometown so he will have a few cards on this site. END_OF_DOCUMENT_TOKEN_TO_BE_REPLACED 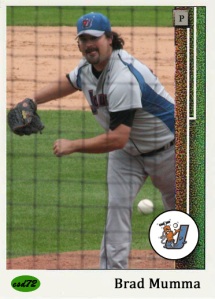 Minor League Monday concludes with another card of local pitcher Brad Mumma. I had some good pictures of him so I thought I would make a couple of cards out of them. Brad was a guy who grew up in my hometown of LaPorte, IN before playing briefly in the Blue Jays organization. He closed out his career by pitching for the Joliet Jackhammers. END_OF_DOCUMENT_TOKEN_TO_BE_REPLACED 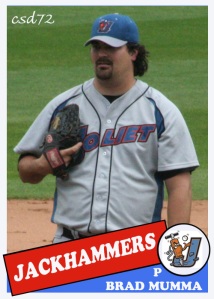 Brad is a pitcher from my hometown of LaPorte, IN. He spent time in the Blue Jays organization, but ended up pitching for the Joliet Jackhammers in 2009. I was at a game he pitched against the Railcats and took a few pictures of the hometown boy. I used the template that I used to make the 25th anniversary White Sox set for this card. I know that it doesn’t look like the actual 1985 Topps card, but I really like how it looks. END_OF_DOCUMENT_TOKEN_TO_BE_REPLACED