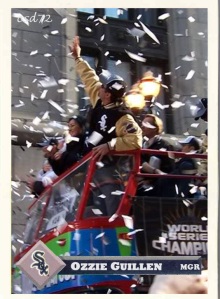 This is kind of a weird card for me to make for two reasons. One of those is that Ozzie was in this set as a player. I usually don’t make cards like this, but I felt the need to make the card. The second reason is that Ozzie is no longer the manager of the Chicago White Sox. Ozzie came in and took the Sox to the next level. He won the World Series in just his second year at the helm of the team. He has never been able to re-create that success though, and that might be a partial reason as to why he was fired. As a Sox fan I am torn today. I realize that something had to happen. That being said I am excited to see how the Sox will go from here. Of course I am also sad to see the skipper go. END_OF_DOCUMENT_TOKEN_TO_BE_REPLACED

Jeff is a player that I have followed for a while now. He played sports at nearby Valparaiso high school then starred in football and basketball at Notre Dame. From there he has risen to the Majors playing in nearby Peoria and Iowa before ending up with the Cubs. He has stayed near the area making his rise fun to watch. END_OF_DOCUMENT_TOKEN_TO_BE_REPLACED 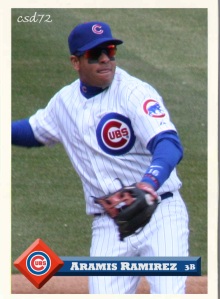 I have had this card made for a while, but have not released it yet. Like most cards I make it came in a card making spurt, and if they don’t get posted right away I tend to forget about them. I want to post my new creations first. To me this card is cool because it represents the first year in many that I did not pick up any cards. I had so many other things going on that the hobby kind of fell away from me. I still don’t collect many actual cards, but getting to know the designs of the cards during the period that I did not collect (1993-2002) has actually been pretty fun. END_OF_DOCUMENT_TOKEN_TO_BE_REPLACED

I made a couple of cards with pictures of Juan with the Bob Feller tribute behind him, and had one more that I wanted to use. I had already used up a couple templates for Juan that I could have put this picture on so I used the ’93 Donruss template. I think that it worked out well. END_OF_DOCUMENT_TOKEN_TO_BE_REPLACED

Why am I making a retro card when there are so many cards to make for my various original sets? The answer is simple. I wanted to put my own card on the back of the Opening Day Carlos Santana card, and I had not yet seen him play to have a card to put on the card. Instead of using another card I just thought I would make my own card. I really like how this ’93 Donruss set looks so I thought that I would put the picture on this card. END_OF_DOCUMENT_TOKEN_TO_BE_REPLACED 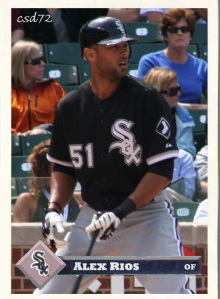 This is the 14th card that I have posted today. I had to make some of them on the fly to make this day work. The first few were all made, but a few of them had to be made tonight. I found this card while looking for a good 1992 Donruss template. I never really collected it, but I loved how it looked. I figured that I could squeeze one more card into this day. It was a simple design that was easy to make. I just separated the name plate and team area, and then put the picture behind them. I really loved this design, and even though it is newer I thought that I might try a few more before it is all said and done. END_OF_DOCUMENT_TOKEN_TO_BE_REPLACED