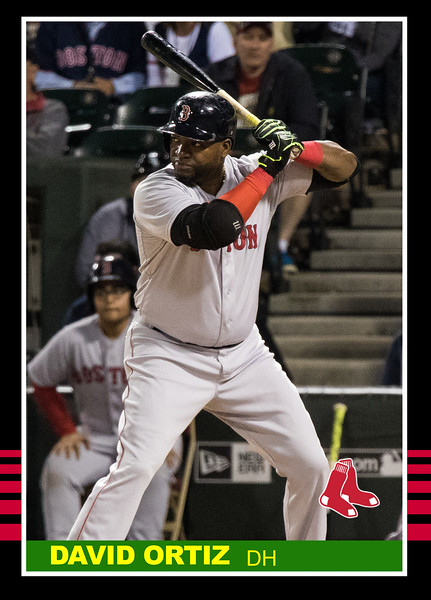 Carlton had a White Sox version of this inaugural Upper Deck set so I thought that I would see what a Red Sox version would look like.

Kevin is a player that I liked very early on. In 2003 I met him at the Futures game at U.S. Cellular Field. He was very nice, and signed a ball for me. Even as a White Sox fan I was always a Youkilis supporter. It was nice last year to see him play for the White Sox even if it was only for a short time.  END_OF_DOCUMENT_TOKEN_TO_BE_REPLACED

With Tek retiring I thought that he deserved another day on this site. My favorite player was a catcher on the Red Sox, and ever since then I have taken a little notice of the other backstops in Boston. Rich Gedman was the one in the 80’s that caught my eye. For a long time now Jason Varitek has been the guy. I took this picture last August while Jason was catching against the White Sox. I was happy that he caught the Sunday game so that I could see him catch one last time. Varitek has really succeeded at every level that he has played. Look up his stats, and you will be impressed with how his teams have done over the years. Boston has a huge hole to fill.  END_OF_DOCUMENT_TOKEN_TO_BE_REPLACED

With all the talk about Jason Varitek retiring tomorrow I thought that I would post a card that I made of him last season. This card was made with the intention of releasing it on the 25th anniversary of the Red Sox game six. Of course that never happened so I had it available to release today.  END_OF_DOCUMENT_TOKEN_TO_BE_REPLACED

Here is yet another card in the mock Carlton Fisk tribute that I made up. This card might not have been made yet if not for the Gary Carter tribute set that I made upon learning of his death. It was with that set that I made the decision to leave out the All Star and other special cards in order to keep things running a little better. I did include the ’81 Topps traded card of Carlton though. He did play for the White Sox in ’81 so it had to be there. Where things would have started getting tricky was in 1982 with the In Action and All Star cards that Topps put out. I think that for now those were best left off of the card.  END_OF_DOCUMENT_TOKEN_TO_BE_REPLACED

Today just feels like an ’85 Fleer kind of day. I don’t know if that is true, but I did want to post this card of Jonathon Papelbon that was sitting in my custom folder. I took the picture last August as the former Red Sox closer was finishing off a game against the White Sox. It will be weird to see him pitching for the Phillies this season.  END_OF_DOCUMENT_TOKEN_TO_BE_REPLACED

I have been a fan of Marco’s ever since I saw the documentary A Player to be Named Later that showed life in the minors. I really watched the movie because it followed the Indianapolis Indians for a season. I loved it, and Marco was one of the few players in it who made it to the bigs. This was my first chance to photograph him last August so of course I made a couple cards using his pictures. I was going to release them as part of a series of posts in October celebrating the 25th anniversary of the ’86 World Series, but that never panned out. It finally makes it on here today. END_OF_DOCUMENT_TOKEN_TO_BE_REPLACED

Just before I quite making cards I had this great idea to make a set much like the one that Topps did for Pete Rose in 1986. They took all of his cards and put the in sets of four to have a career spanning set. This is the second card of that set spanning the years 1976-1979. From here I have some decisions to make concerning the cards. If I don’t put any of the special cards or all star cards on the cards it will work out very nice. In my opinion though those cards are very important. I want to place them on the cards as well. I also toyed with the idea of adding Fleer and Donruss into the mix initially, and then Upper Deck and the others later. Of course things would get very confusing late when all the companies jumped into the mix. For now I think that I will keep things to just Topps. Later I might add some cards with just Donruss or just Fleer. I will at least make the next card in this set before deciding how to proceed.  END_OF_DOCUMENT_TOKEN_TO_BE_REPLACED

Last season I saw Ryan have a great game against the Indianapolis Indians. Just the fact that he was a catcher was going to get him a couple of cards on this site, but the great game sealed the deal. Part of the fun of this site is seeing my favorite cards from my childhood with current players on them.  END_OF_DOCUMENT_TOKEN_TO_BE_REPLACED

Part of the fun for me with this blog is going back and re-creating the cards that I loved as a child. For the most part I have taken my pictures and put them on the templates from pre 90’s cards. One of the cooler sub sets that I can remember from the 80’s was the Pete Rose tribute set that Topps put out in 1986. They had all of his base cards in a six card set. Of course I had to try and re-create this set. I was going to use some cards of Paul Konerko that I had made. To get that going though I would have to creat a couple of new ones to start. Instead I thought about how cool it would be to just make this set for my favorite player as a child, Carlton Fisk. I have only made the first card so far, but I like how it turned out. It might be a while, but I plan on finishing this small mini set. END_OF_DOCUMENT_TOKEN_TO_BE_REPLACED

I really would like to make more cards like these from the 80’s. Of course I can’t get the access to the players that the card makers do. I have to get kind of creative to get these made. I chose the ’87 Fleer template because I love how the card looks. END_OF_DOCUMENT_TOKEN_TO_BE_REPLACED

This is the first of a few cards of Red Sox players using pictures that I took yesterday. Before the season started I knew that I wanted to make some ’86 Topps cards because of that great World Series played 25 years ago. I have a few good pictures of Carl that will make it onto this site over time I am sure. END_OF_DOCUMENT_TOKEN_TO_BE_REPLACED

Here is yet another card from the ’86 Topps set. This makes four in a row for the set on this blog. This is the 25th anniversary of the set, and I thought that over the year I could make a few of them. It is a simple design to copy so it has that going for it as well. END_OF_DOCUMENT_TOKEN_TO_BE_REPLACED

Brent is a player that I would love to see play in the big leagues one day. I saw him play for the West Michigan Whitecaps who are the Single A Affiliate of the Detroit Tigers. A couple of years later I saw him play for Toledo who is the Triple A affiliate of the Tigers. Now I have seen him play for yet another Triple A team. He would be one of the few players that I have seen play at three levels of baseball if he ever made it up to the Bigs. END_OF_DOCUMENT_TOKEN_TO_BE_REPLACED

I can’t explain why, but I really enjoyed collecting and watching Tony Pena play as a kid. I guess I followed a few catchers, but Tony was right up there. Part of the fun of seeing the Pawtucket Red Sox play on Saturday was the fact that I could watch Tony’s son play. I never did get to see him get into the game, but he did catch in the bullpen for the relievers. What makes this odd (at least to me) is that Tony is a reliever himself. I guess he just has catching in the blood. I love this set, and I am glad that I could get the Pena’s in it. I also found it cool that Tony Jr.’s team was playing the Triple A affiliate of the team (the Pirates) that I picture his dad on. Tony Sr. also played for Boston. I was tempted to have them both in the same colors, but went with this look instead. END_OF_DOCUMENT_TOKEN_TO_BE_REPLACED

This may be the only Red Sox card in this set. I only really had one usable picture of a Red Sox player in the archives. I have to see a game with them this season for a couple reasons, but that is one of them. I like the look of this Red Sox card so I need to make more of them. END_OF_DOCUMENT_TOKEN_TO_BE_REPLACED

This is the second short print card of Ted in this set. I made two with the intention of picking one, and maybe using the other. Then I started making other cards so I was going to use this picture for one of them. Since I had already made the card I thought why not release it. This is the final card of the 2010 set. END_OF_DOCUMENT_TOKEN_TO_BE_REPLACED

Part of the 2010 custom set was a short print series I came up with. These were cards that were not of active players. Some of the older players I had to use pictures of statues to make them. This statue along with the statue of Babe Ruth guards the entrance to the Baseball Hall of Fame in Cooperstown, New York. I have taken pictures of two great Ted Williams statues in the past two years. This one made a great card I thought. END_OF_DOCUMENT_TOKEN_TO_BE_REPLACED

Anyone who reads either of my two blogs knows that I like the catcher position more than any other. That being said how can you not like a guy like Jason Varitek? He played one game for the Red Sox in 1997 and has been their catcher ever since. He was also named their third captain after the 2004 World Series win. He recently signed a one year deal to stay in Boston for the 2011 season. He really is a staple for the Red Sox. END_OF_DOCUMENT_TOKEN_TO_BE_REPLACED

This was also part of the 2010 set that I did. John is one of the bigger name pitchers in the league so I knew that I wanted him in the set. Since I did not see Boston play last year I had to use a picture from his time with the Angels. I thought that maybe it could pass as a weird alternate uniform for the BoSox. I made this card early in the year thinking that I would see him when the Red Sox came to town and change the picture. That of course never happened so I was stuck with the picture you see. END_OF_DOCUMENT_TOKEN_TO_BE_REPLACED

I am really stretching things here. The picture on this card was taken in 2003 with a camera that was good for its time, but the quality is not that great. I really wanted Wake in the set though so I just used it. The problem with using your own pictures for cards is that sometimes you have to use one that you normally wouldn’t. No matter what Wake is now in the set. END_OF_DOCUMENT_TOKEN_TO_BE_REPLACED