I was blessed to get to watch Tim Lincecum pitch a couple of weeks ago. I really love his style, and it was perfect for making lots of pictures. I had a great seat to make pictures of him during the game, but late in the game I was asked to move behind the plate for a minute while they helped a VIP get out of the row. Of course I took that to mean that I could get right behind the plate to make a couple of pictures. I did just that, and the photo above one of those that I took from there.  END_OF_DOCUMENT_TOKEN_TO_BE_REPLACED 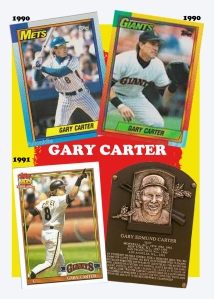 Things have started to get a little shaky in my idea now. I have six cards left and two cards to put them on. I decided to split the cards up into sets of three, and put Gary’s plaque in the fourth slot. I think that it made things look a little better rather than having two years on the final card. END_OF_DOCUMENT_TOKEN_TO_BE_REPLACED

Mark is one of the Cubs that I really grew to like during his tenure with them. I could not believe it when they let him slip away. Then he went to the rival Cardinals and I knew that they would not be happy about that. I decided that now was the time to try a ‘now with’ card that I grew up with. Topps would not even try to airbrush a card sometimes, but would just type some extra letters to let you know that the player has switched teams. This is my try at that card. END_OF_DOCUMENT_TOKEN_TO_BE_REPLACED