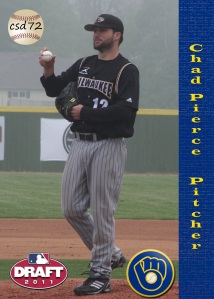 On the third day of the draft a few more players have been selected that I have seen play in person. I guess more importantly I have a good picture of them. Chad was a player that I watched play in a doubleheader this year at Valpo. He pitched the first game of the doubleheader giving a great effort, and then played first base in the nightcap. He also catches. I took a couple pictures of him that day knowing that he would get a card in this set. I have not gotten around to making those cards from that day though so his regular card will be a little down the line. END_OF_DOCUMENT_TOKEN_TO_BE_REPLACED