Here is a card that I made very early on in my card making process. At the time I did not think that A.J. would make it past the trading deadline at the time. He actually stayed a couple of years after that so this card really shows its age. I was just learning a few things, and this card is very rough. I like the idea though so it makes the site. If anything it just shows how far I have come.  END_OF_DOCUMENT_TOKEN_TO_BE_REPLACED 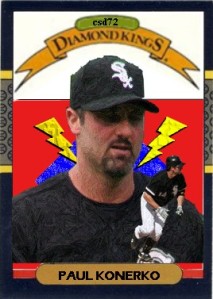 How can you talk about Donruss all day without mentioning the Diamond Kings? Diamond Kings were one of the coolest parts of the set as a kid. Who would be crowned king this year? Who would the Sox king be? I made this card early on in the custom card days so it is a little rough, but I put a lot of work into it so why not post it? END_OF_DOCUMENT_TOKEN_TO_BE_REPLACED

I actually made this card before the regular ’85 Donruss card of Mark. I was looking through some old cards and thought that it would be neat to try and make a Diamond King card. I chose 1985 because this site was driven by the 25th anniversary of my first ballgame. The main part of the card was not too hard to make. I had to take an actual Diamond King banner from a ’85 card to make my own because I had no clue where to begin making one. I added my own personal touch to it by putting my brand on it. I had a lot of trouble with the background at first. Nothing looked right. I tried many colors, but none of them did it for me. I ended up with colors similar to the ones the ’85 Sox team wore, and put a burlap filter on them. For some reason I liked how that ended up and stayed with it. END_OF_DOCUMENT_TOKEN_TO_BE_REPLACED