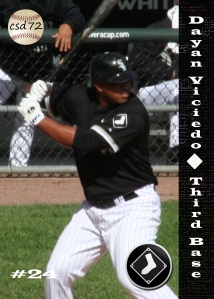 After the success the White Sox had with Alexei Ramirez I think that Sox fans (including myself) expected the same from Dayan Viciedo. He has taken a little longer to progress than I think the Sox even thought. That being said when he gets a hold of the ball it shoots off his bat like a rocket. With a nickname like ‘the tank’ it is hard not to root for him. END_OF_DOCUMENT_TOKEN_TO_BE_REPLACED 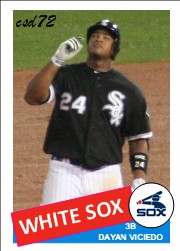 Today I am going to the Sox game so I thought that I would post a few Sox cards. Dayan is one of the newest additions to the Sox roster. He was signed out of Cuba to be a power bat in the lineup. He struggled a bit in the minors, but has been playing well since joining the big league club. He will be a fun player to watch mature. END_OF_DOCUMENT_TOKEN_TO_BE_REPLACED