Here is another of my ’89 Upper Deck cards that have just been sitting around. Early in 2010 I attended a White Sox game against the Twins. A group of players were warming up and I just snapped a shot of them. I think that that picture has been made into a couple of cards so far. END_OF_DOCUMENT_TOKEN_TO_BE_REPLACED

I thought since I am a Sox fan I should actually post some cards of my favorite team. I was having so much fun making cards of other teams that I neglected the one that I root for. I took this picture of Tyler in 2009 when he was brought up at the end of the season. He has come with a lot of hype, but yet the veteran catcher is still around. I fear that Tyler is headed for Joel Skinner status in Chicago. END_OF_DOCUMENT_TOKEN_TO_BE_REPLACED

The final card of Mark today is one of my favorites. As luck would have it I came across a free ticket to a Cubs-Sox game in 2009. Of course as per usual Mark was pitching. Being in a National League park though it also meant that Mark would get some at bats. I always thought that Upper Deck really changed things up when they started by showing some things that were out of the norm. I think that Mark running to first with his batting helmet on was a perfect fit for this card. END_OF_DOCUMENT_TOKEN_TO_BE_REPLACED 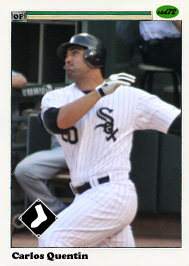 This is where things start to get a bit harder. I have always loved watching Carlos play. No matter what his at bats are usually exciting. He doesn’t get cheated, and rarely watches a third strike. You get your money’s worth when he steps in. He may hit a towering home run, or just simply let a 95 mph fastball hit him in the chin. He was fun to watch, but if you want to watch him from now on you have to watch the Padres. We share the same birthday as well. It will be interesting to see what Carlos does in the National League. I have seen one of the pitchers that the Sox got in return when he was in Single A. Simon Castro was a beast for For Wayne of the Midwest League. Hopefully he can show that form in the bigs. END_OF_DOCUMENT_TOKEN_TO_BE_REPLACED

Earlier this season I saw the Mariners play a game against the White Sox. I had heard so much about Justin Smoak that I was intrigued to watch him play the last couple of seasons. He was a very highly thought of prospect that is finding his way in the bigs right now. I thought I would make a couple of Upper Deck cards with some of the pictures that did not make it onto his ’11 custom card. END_OF_DOCUMENT_TOKEN_TO_BE_REPLACED 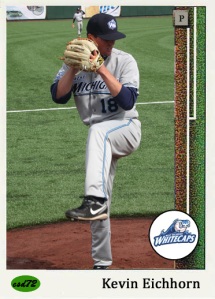 I took a few pictures of Kevin so that I was sure to get a good one for my set. Being the son of a former big league player I knew that he would have at least a couple of cards in the set. I had enough pictures of him that I liked though that it allowed me to make some extra cards of him. This is one of those. END_OF_DOCUMENT_TOKEN_TO_BE_REPLACED 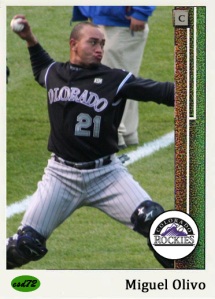 Miguel was a very solid catcher for the White Sox. He was traded to the Mariners in the deal that brought Freddy Garcia to the Sox. He has since been on a few teams in the Majors. This past off season had to be weird for him. He was traded to the Blue Jays who then declined his 2011 option making him a free agent. The Mariners then signed him, and that is where he is now playing. Must be strange to get traded to a team who then does not pick up the option to keep you. END_OF_DOCUMENT_TOKEN_TO_BE_REPLACED 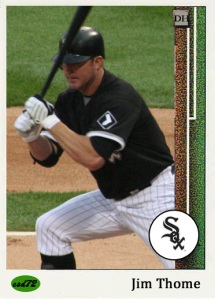 I am sure that I will come up with a couple more over time, but for right now this is the last Thome card as a member of the White Sox. Looking at the picture I realized that if I could take more like this it would be real easy to take pictures for Upper Deck now. I have somehow taken a picture with almost all the logos covered up. END_OF_DOCUMENT_TOKEN_TO_BE_REPLACED

Minor League Monday concludes with another card of local pitcher Brad Mumma. I had some good pictures of him so I thought I would make a couple of cards out of them. Brad was a guy who grew up in my hometown of LaPorte, IN before playing briefly in the Blue Jays organization. He closed out his career by pitching for the Joliet Jackhammers. END_OF_DOCUMENT_TOKEN_TO_BE_REPLACED

This is another card that has been sitting in a file for a while. I made it as one of the first few Upper Deck cards just after the last game of the season. When I was going through my pictures I knew that this one had to be on a card. END_OF_DOCUMENT_TOKEN_TO_BE_REPLACED