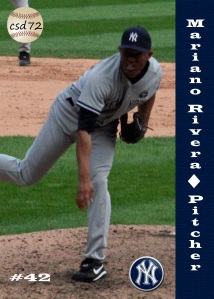 I really don’t think that I can say anything here that hasn’t already been said about Mariano. He is one of the best (if not the best) closers this game has seen. He has a great shot to get to 600 saves this year, and then just after that he can become the all time saves leader by passing Trevor Hoffman. This could be a historic year for the sure fire Hall of Famer. END_OF_DOCUMENT_TOKEN_TO_BE_REPLACED

I thought that since one of the best closers ever is going to retire that is no reason why he can’t have a card in this set. I took this picture in 2007 when I saw the Padres playing the Cubs. I knew that Trevor was good, but at the time I had no idea that the picture would end up on a card. I decided that since he doesn’t have a team that it wouldn’t matter that I made a Padres card for him. One of my all-time favorite cards was the 1989 Fleer card of Mike Schmidt where they honor his career. For some reason I have always liked that. I thought that a card showing him on the team where he did the most damage was the best course of action. If you notice I did change one thing on the front. Instead of a dash in between the players name and position I placed a diamond there. I thought that it looked good as well as being the surface that the game is played on. END_OF_DOCUMENT_TOKEN_TO_BE_REPLACED 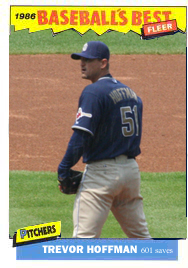 With the news today that Trevor is retiring I thought that I would make a couple cards of him. This one was probably done a little too quick. It is from the 1986 Fleer Basball’s Best subset. The original card had Goose Gossage on it in a Padre uniform so I thought it was only fitting to put Trevor in his place. END_OF_DOCUMENT_TOKEN_TO_BE_REPLACED