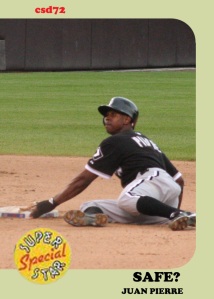 Here is the other half of the Super Star Special Card I made. Like I said I had made two separate cards for the 1971 set out of the same picture. I then came up with the idea to put them together on a 1983 Fleer card to mirror the classic Speed and Power card featuring Rickey Henderson and Reggie Jackson. I liked how it turned out so I had it post first thing this morning so that I had it on the site. As with the other card the full card is shown after the jump. END_OF_DOCUMENT_TOKEN_TO_BE_REPLACED 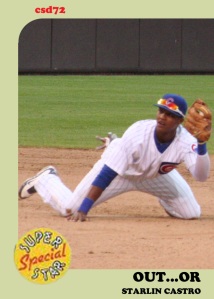 One of the cards that I really enjoyed as a kid was the Speed and Power card of Rickey Henderson and Reggie Jackson. I saw card, but it was actually two cards that you put together to form one card. I had a cool picture of Juan Pierre stealing a base, and Starlin Castro holding up his mitt. I made two separate 1971 Topps cards out of that one picture. As the cards sat in my folder waiting to be released on this site I noticed how they almost could be put together. That is when I came up with the idea for this card. It was a little trickier than I thought it would be to get both sides to line up. My first attempt left me with a picture that was a little off. Using the grid function in my program though allowed me to do it with ease. After the jump I have included an image of the card as one piece. END_OF_DOCUMENT_TOKEN_TO_BE_REPLACED