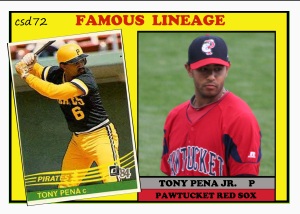 I can’t explain why, but I really enjoyed collecting and watching Tony Pena play as a kid. I guess I followed a few catchers, but Tony was right up there. Part of the fun of seeing the Pawtucket Red Sox play on Saturday was the fact that I could watch Tony’s son play. I never did get to see him get into the game, but he did catch in the bullpen for the relievers. What makes this odd (at least to me) is that Tony is a reliever himself. I guess he just has catching in the blood. I love this set, and I am glad that I could get the Pena’s in it. I also found it cool that Tony Jr.’s team was playing the Triple A affiliate of the team (the Pirates) that I picture his dad on. Tony Sr. also played for Boston. I was tempted to have them both in the same colors, but went with this look instead. END_OF_DOCUMENT_TOKEN_TO_BE_REPLACED

Earlier this season I was at a Hoosiers game against the Boilermakers when I noticed many scouts in attendance. Most of them were paying a lot of attention to the DH for the Hoosiers Alex Dickerson. Alex was once thought of as a potential first round pick. He fell to the first pick of the third round, and 91st overall. END_OF_DOCUMENT_TOKEN_TO_BE_REPLACED

Normally Monday’s are reserved for Minor League cards. With the surplus of preview cards that I have I have to try and get them out before the start of the season. I found a compromise though that I thought would work. Lyle Overbay was one of the first Silverhawk players that I saw regularly that made it to the bigs. He was a great hitter for South Bend, and has since provided his talents for the Diamondbacks, Brewers, Blue Jays, and now the Pirates. He will always be my favorite because he was the first. He also signed one of my first pictures that I took for me instantly making him a fan favorite. END_OF_DOCUMENT_TOKEN_TO_BE_REPLACED 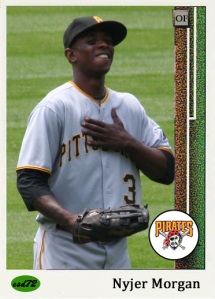 This past weekend at a card shop I found some 2002 Upper Deck cards that were styled like the 1989 Upper Deck card. I really liked how they looked with updated logos. I may toy with throwing some of the updated logos onto the cards to see how they look. Since the company that made the card has copied their design I don’t feel so bad anymore. END_OF_DOCUMENT_TOKEN_TO_BE_REPLACED