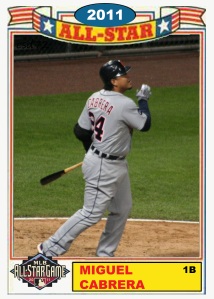 Since he came into the league with the Marlins Miguel Cabrera has been a force. He is now playing in what should be another post season after helping Detroit claim what you would guess in the Central. Both the Indians and Sox are so far back that it would take a monumental collapse by Detroit for either team to have a shot. END_OF_DOCUMENT_TOKEN_TO_BE_REPLACED 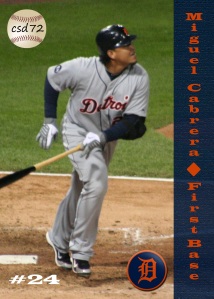 Miguel has been in the news for all the wrong reasons so far this season. As I said on the back of this card I would bet that he can’t wait until the season starts so that he can let his bat do the talking. He is one of the elite players in the league so we should be talking about his play. END_OF_DOCUMENT_TOKEN_TO_BE_REPLACED 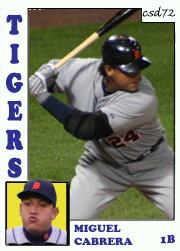 I like the idea of coming up with sets for the World Champs. In 1984 the Tigers took home the hardware. I had the 1986 Mets card earlier in the day so I thought I would post a 1984 Topps card of a Tiger player. Miguel Cabrera is one of the best players in the league. He is a feared hitter that has been dominant almost from day one in the bigs. END_OF_DOCUMENT_TOKEN_TO_BE_REPLACED