Chris is a player that I have followed for a while. He came up with the White Sox before being traded to the Diamondbacks. He had a good day on Opening Day yesterday for the D-Backs so I thought I would release this card of his that I made last season.  END_OF_DOCUMENT_TOKEN_TO_BE_REPLACED

A set just wouldn’t be a set on here until the Fisk card was added to it. I was going to add this card first, but I decided to release the Jackie Robinson card first Friday. It just seemed like a good way to kick off the set. The set can really get going now that my favorite play has been released. END_OF_DOCUMENT_TOKEN_TO_BE_REPLACED 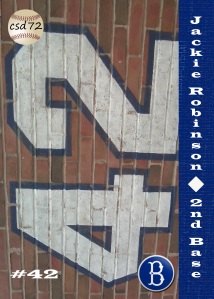 This is the first card in the regular issue set to be released. What card would be better to kick off the set today than a card of Jackie Robinson. Since my cards are made with my own pictures it would be impossible to get one of Jackie since he died before he was born. He is so important to baseball though that I wanted to get him in this set. Today across the country he will be honored at every ballpark. Major League Baseball has done a great job of honoring him every year, and this year toook it a step further by starting up the website iam42.com that enables past baseball greats, present players, and everyday Joe’s to share their Jackie Robinson memories. END_OF_DOCUMENT_TOKEN_TO_BE_REPLACED

Mark Reynolds is another former South Bend Silverhawk player who made it to the Major Leagues. He made it to the bigs with his big swing. He made it with the club that he came up with, the Arizona Diamondbacks. Now that he has become a name in the Majors he signed with Baltimore this offseason. He will be bringing his free swinging ways to the American League East next season. END_OF_DOCUMENT_TOKEN_TO_BE_REPLACED

I guess this set has already had a moment like the major sets do. I made this card of Brian last night, then today found out that he had signed with a team in Japan. The early sets usually have players playing for teams other than the ones they actually do so I thought that I would go ahead and post the card. I may even try my first Japanese card with Brian. It will be interesting to see what he does with the Yumiuri Giants in Japan. END_OF_DOCUMENT_TOKEN_TO_BE_REPLACED