During the week one of my Twitter followers suggested that I try a card from the 1988 Topps set. I really have been holding off on the set for a couple of reasons, but thought that I would give it a try. What I came up with was not an exact replica, but more of a tribute. I tried my best to re-create the card, but there are a couple things that may stand out right away. I like how it looks from afar though. I was never crazy about the color choices for this set. I may have to try an alternate version with better colors before it is all said and done. END_OF_DOCUMENT_TOKEN_TO_BE_REPLACED

Since I will be at the game right now I thought that I would post a card of the starter for the White Sox. I made this card a while back when I made the rest of my 1980 Topps cards. It was the last one left, but in trying to get all my sets on here early I couldn’t post this card. What better time to get it out. END_OF_DOCUMENT_TOKEN_TO_BE_REPLACED

Yesterday I was lucky enough to be in Cleveland to see the Sox open the season against the Indians. A while back I had decided to try an Opening Day mini set using only pictures taken on Opening Day. Of course I just thought that it would be the Sox Opening Day in Chicago. Here is the first of those cards. END_OF_DOCUMENT_TOKEN_TO_BE_REPLACED

I was able to watch John pitch for the Sox today during the last telecast of the season for the Sox from the spring. He didn’t look great, but he did look decent. Who knows what is going  on with a pitcher in Arizona? It didn’t help the Sox today that Omar Vizquel made two errors. END_OF_DOCUMENT_TOKEN_TO_BE_REPLACED 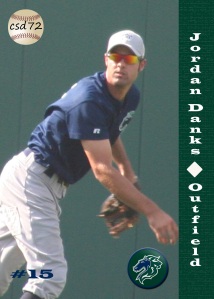 Jordan is the brother of current Sox pitcher John Danks. Jordan currently plays for the Charlotte Knights of the International League. He is one step away from joining his brother on the big club. That is a big step though, and one that he has been trying to make for a couple of years. END_OF_DOCUMENT_TOKEN_TO_BE_REPLACED 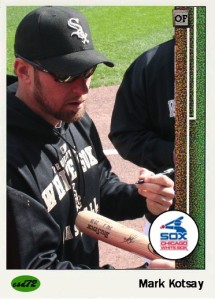 This is another card that has been sitting in a file for a while. I made it as one of the first few Upper Deck cards just after the last game of the season. When I was going through my pictures I knew that this one had to be on a card. END_OF_DOCUMENT_TOKEN_TO_BE_REPLACED

The White Sox have announced that Mark Buehrle will be the Opening Day starter for the ninth time in his career. Many have said that the season John Danks had last year gave him the right to be the Opening Day starter. Mark has done so much for the organization though that it seems as if until he is gone the job should be his. I thought that with the news it was time to release his preview card for the 2011 set. END_OF_DOCUMENT_TOKEN_TO_BE_REPLACED 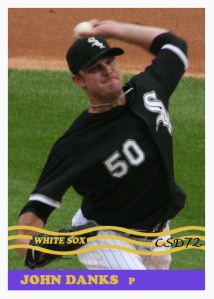 In 1984 Donruss tried something completely different. As I kid I remember this set because it was so hard to come by. I had just started collecting cards. I had a few 1984 Topps cards in my collection. For Christmas of 1985 I was given a complete 1984 Donruss set by my uncle. The coolest part of the set was that it was built by hand, and for some reason had two Mattingly rookies in it. Back then that card was like gold. I wanted to make this card for a while, but did not know how to handle the bar with the team name on it. While this is not an exact repllica it is the best I could come up with, and I think that it embodies the spirit of the card. That is enough for this set. END_OF_DOCUMENT_TOKEN_TO_BE_REPLACED

By 1983 Donruss was starting to find their stride. The design was similar to the 1982 design, but the pictures seemed to be getting better. The bat stayed on the bottom of the card, but the team name was now on a baseball glove. I went back and changed the logo on this card as well to keep the year. I had just my script name in the upper left hand corner, but thought it looked much better with the year. I did replace the Donruss logo with my own though. END_OF_DOCUMENT_TOKEN_TO_BE_REPLACED

As a kid growing up one of the weirdest cards I ever saw was the 1985 Donruss card of Tom Seaver with Floyd Bannisters picture on it. As a kid you pick up on the fact that Seaver was a righty and Bannister was of course a lefty. How could someone miss that? Looking back as an adult it is even more mind boggling. Seaver was a few wins shy of 300 going into the 1985 season, and was a sure Hall of Famer. You would think his card might get a second look. I am sure someone heard about the mistake after it was found. I would hate to have been that guy. END_OF_DOCUMENT_TOKEN_TO_BE_REPLACED