Dustin was a fun player to photograph last spring. I had watched him play football for my hometown team, but had not seen him play baseball yet. I am a Purdue fan, but I did root for Dustin (who plays for the hated Hoosiers) when he came to bat. I was lucky enough to see a couple games that weekend so Dustin has had a few cards made from them.  END_OF_DOCUMENT_TOKEN_TO_BE_REPLACED

Part of the fun of this site is making cards for this site is coming up with some things that I did not know. Growing up I enjoyed watching Chuck Knoblauch play. He played for a rival, but that didn’t stop me from enjoying the scrappy way with which he played. While attending a Purdue game earlier this year I noticed a familiar name on the roster for IU. I checked his bio on my phone, and sure enough Trace Knoblauch is the nephew of Chuck. END_OF_DOCUMENT_TOKEN_TO_BE_REPLACED

Earlier this season I was at a Hoosiers game against the Boilermakers when I noticed many scouts in attendance. Most of them were paying a lot of attention to the DH for the Hoosiers Alex Dickerson. Alex was once thought of as a potential first round pick. He fell to the first pick of the third round, and 91st overall. END_OF_DOCUMENT_TOKEN_TO_BE_REPLACED

Can you guess why Eric has made this set? When I heard his named announced during a game against Purdue I had to check my roster to see if I heard it right. Although it is not spelled the same it is pronounced just like the South Park character. I immediately knew that he had to make this set. END_OF_DOCUMENT_TOKEN_TO_BE_REPLACED

Wes is a player that had a great weekend when I saw him play live. Couple that with the fact that he is a catcher, and he gets a couple of cards on this blog. END_OF_DOCUMENT_TOKEN_TO_BE_REPLACED 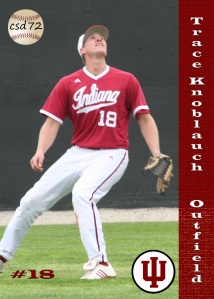 Earlier I posted the ’87 Topps card of Trace. Here is his 2011 custom card. Normally a player like Trace would not be in this set, but his uncle is Chuck Knoblauch so that gets him in. In the near future I will post my Famous Lineage card with Chuck and Trace on it. Trace really did not look comfortable in the field during the game I saw him play. He had one misplay and a couple of near misses. In his defense it was windy though so I can’t make too many snap judgements on his fielding. He has some time to get better before he graduates. END_OF_DOCUMENT_TOKEN_TO_BE_REPLACED

While watching a game earlier this season between the Indiana Hoosiers and the Purdue Boilermakers I noticed a familiar name on the roster for Indiana. A quick check on my phone confirmed that Trace is the nephew of former big leaguer Chuck Knoblach. Chuck was one of my favorite players to watch when he played for the Twins. It is weird to enjoy watching a player on a division rival. I kind of have that now with Joe Mauer on the Twins. END_OF_DOCUMENT_TOKEN_TO_BE_REPLACED

Alex has a couple of cards coming up on this site even though he is a Hoosier. In the couple of games that I saw him play in he really did not do anything special, but I have seen his name on top 30 list for the MLB entry draft so much that he must have something great going on. He didn’t play the field the whole weekend so maybe he was nursing an injury. That did not stop a handful of scouts from coming out to see him. END_OF_DOCUMENT_TOKEN_TO_BE_REPLACED

Dustin was a player that I watched play football for my hometown high school team for four years. Needless to say as a Purdue fan I was a little disappointed when he signed with Indiana to play baseball. He was part of the draw of attending the games this weekend. This is the first of five Hoosier cards that I plan to have in this set. It pains me to make that many cards of a rival school, but each card has a reason for being in the set. END_OF_DOCUMENT_TOKEN_TO_BE_REPLACED