One year ago today the Packers won the Super Bowl. I thought that in honor of the anniversary I would post some cards that I made last year right after the Packers won the big game. I was hoping that they would be playing in Indy this past weekend, but of course that was not meant to be. Instead of celebrating another win I guess I will have to relive the big win last year. END_OF_DOCUMENT_TOKEN_TO_BE_REPLACED

I really wanted these cards when they came out originally. That might be why I made a few of these yesterday. They will be coming out throughout the week because I don’t want to flood the site with the same type of card. These cards really look good, and I like how my pictures look on them. It is no surprise then that I made a few of them. END_OF_DOCUMENT_TOKEN_TO_BE_REPLACED

I really thought Charles Woodson was going to have a big game yesterday. What I didn’t expect was him to break his collarbone trying to make an interception in the first half. You could see how much pain he was in during the second half when he was trying to cheer his team on. The game changing effect I thought he was going to have almost went the other way. END_OF_DOCUMENT_TOKEN_TO_BE_REPLACED 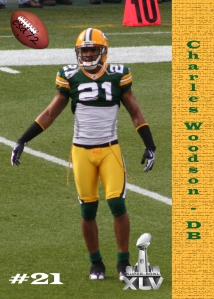 The last time the Packers won the Super Bowl they did it with the help of a former Michigan Heisman Trophy winner. Desmond Howard was the MVP of the game, and was obviously a huge part of the win. This year the Packers have another former Heisman winner in Charles Woodson. Charles was a dynamic force for Michigan at cornerback. He was such a force that he is the only defensive player that has won the award. END_OF_DOCUMENT_TOKEN_TO_BE_REPLACED