Nick was selected in the MLB draft twice by the Reds in 2001 and 2002, but did not sign either time. In 2003 he was taken 7th overall by the Orioles, and this time Nick signed. He has blossomed into a solid outfielder that the Orioles hope that they can build around. END_OF_DOCUMENT_TOKEN_TO_BE_REPLACED

Matt is one of the good young catchers in the league. I was happy to see him in 2009 when the Orioles came to town. He was one of the hot young players at the time. He had a lot of hype surrounding him predicting greatness. He is a good catcher, and time will tell where he will rank among some of the greats. END_OF_DOCUMENT_TOKEN_TO_BE_REPLACED 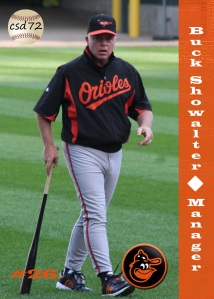 Buck is one of those guys that you hire to turn your club around. The Orioles got what they paid for last season. Buck came in and made the Orioles into winners right away. He has a knack for turning a club around. For some reason he has the same effect that Mike Keenan had in the NHL in the 80’s and 90’s. Buck usually doesn’t win titles with the club though. The next guy usually does that. END_OF_DOCUMENT_TOKEN_TO_BE_REPLACED

Mark Reynolds is another former South Bend Silverhawk player who made it to the Major Leagues. He made it to the bigs with his big swing. He made it with the club that he came up with, the Arizona Diamondbacks. Now that he has become a name in the Majors he signed with Baltimore this offseason. He will be bringing his free swinging ways to the American League East next season. END_OF_DOCUMENT_TOKEN_TO_BE_REPLACED

Although he is no longer a member of the Cubs I thought that I would still put a few cards up of Lee while he was a Cub. I had a couple of good pictures that I thought would be perfect for a couple of card designs. This one seemed to fit the ’88 Score model perfectly. It seemed as if they had about seven kinds of photos that they put on a card. That is not a scientific number at all. It is just me going off of my memory. You have to remember that I take pictures because I have a bad memory. So take my statements lightly. This just looked like a Score picture to me. I really like how this card turned up. I don’t think that I could have taken an actual card and made it look better than my photoshop version. END_OF_DOCUMENT_TOKEN_TO_BE_REPLACED