Since today is Opening Day for the Sox I thought that I would post a couple of cards of the team from the South Side of Chicago. If you haven’t figured out by looking at this site yet that I like the White Sox than you haven’t really been looking at this site. One of the guys that I really will be rooting for this season is Alex Rios. Alex has shown what kind of player that he can be, but sometimes I think that he is his own worst enemy. I hope that he can have another season like we know that he can have this year.  END_OF_DOCUMENT_TOKEN_TO_BE_REPLACED 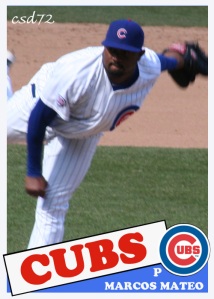 This is yet another card that was made for the sole purpose of being on the back of my 2011 custom card. I never made the regular card so this card for the back never was released. Marcos has a very cool delivery so I am sad that the card was never made. END_OF_DOCUMENT_TOKEN_TO_BE_REPLACED

It is funny how some things work out. I was watching the Ohio State – Miami title game in football from a couple of years back when Jarett Payton was the running back for the Hurricanes. I thought that another Hall of Famer had a son that played for Miami, but then thought that Barry Larkin was not in the hall yet. Not an hour later I heard on TV that Barry was elected today into the Baseball Hall of Fame. I had this card sitting around so I thought that today was the perfect day to post it.  END_OF_DOCUMENT_TOKEN_TO_BE_REPLACED 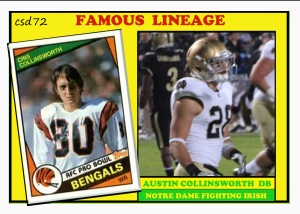 Last weekend I saw Austin play against the Boilers under the lights. My seat was not the greatest so I had very few chances to get a picture of him. On one punt though he downed the ball in front of me allowing me to get the picture for this card. I knew that I wanted to make this card so I was lucky to get at least a picture to put on it. END_OF_DOCUMENT_TOKEN_TO_BE_REPLACED

I really don’t know how I missed this one for so long. I enjoyed watching Dan play for the Boilers for four years. At first we just enjoyed watching him on the kickoff team seemingly making every tackle. Because of injuries his senior year he had a much bigger role on offense. Of course then the injury bug hit him, and I don’t think he was running on all cylinders as the season ended. Of course who is? He was still fun to watch play, and makes a great addition to the Famous Lineage set. END_OF_DOCUMENT_TOKEN_TO_BE_REPLACED

I finally have internet access again although it is only a one day deal. I hopefully will be back up and running by tomorrow. I have been gone it seems like forever. In that time one of the highlights of this upcoming football season has now gone away. Rob Henry went down with a torn ACL yesterday in practice. Last season he came out of nowhere to provide a lot of excitement right away. His fleet feet behind center gave Purdue its first road win against a ranked opponent in his first start at Northwestern. I will be sad that he isn’t on the field this season, but I am still excited for the football season that will start in a little over a week. END_OF_DOCUMENT_TOKEN_TO_BE_REPLACED

While making the Dan Dierking cards earlier today I decided to try a baseball card. I probably would never have thought of doing this, but I saw this exact make of card used for a Josh Hamilton card on A Hair Off Square earlier this year. I figured why not give it a try. Carlos is one of my favorite Sox players because we share a birthday. He seems to have been given all of the baseball skills though. END_OF_DOCUMENT_TOKEN_TO_BE_REPLACED