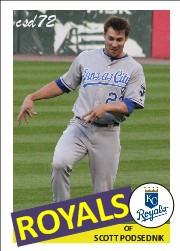 Here is yet another card of a White Sox opponent from this season.Of course everyone knows about Scotty Pods in Chicago. He was one of the additions that sparked the 2005 championship season. After a couple of injury filled seasons the Sox let him go. Last season when we needed another spark he was picked up again for peanuts. He had a good batting average, but like 2005 that never really translated into runs scored. This past off season the Royals signed him just after signing Brian Anderson. If you come to the Cell take a walk to right center field where you will find one blue seat that signifies his game winning home run in Game 2 of the 2005 World Series. END_OF_DOCUMENT_TOKEN_TO_BE_REPLACED