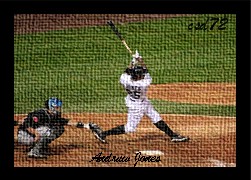 Andruw quickly became one of my favorite players on the team when I was finally able to watch him play in person. His swing to me became a focus with my camera. It is so big and sweet that I love taking pictures of it. What better player to have a second card of in this set? END_OF_DOCUMENT_TOKEN_TO_BE_REPLACED