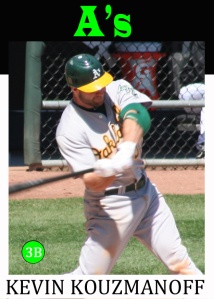 This is a card that I have had made for a long time. There have been cards just sitting in a folder waiting to be made with little hope of getting published. These A’s cards were in a folder because I was going to release them with the 2011 csd custom cards that I was making. When my interest in making the cards died so did the cards that were going to end up on the backs. It is now time to release some of these cards so that they can finally leave the folder.

This picture of Kevin was taken in early 2011 when the A’s were in Chicago to face the White Sox. The cards did not have the best pictures on them because I was saving the better picture for the front of the 2011 custom card. This picture actually looked close to one that you would have seen on the 1986 Topps card though. Sports card imagery was not that great yet.