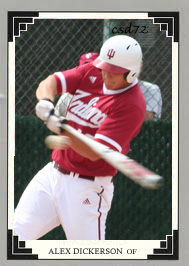 When Indiana came to play Purdue a couple of years ago I had a couple of ideas for players to shoot that played for the Hoosiers. As the weekend went on I heard that Alex Dickerson was really being scouted for the MLB draft. He was eventually selected by the Pirates in the draft, and played in high A ball last season. Time will tell how far he will climb, but maybe someday he will be playing for the Pirates Triple A team in Indy. Alex has been featured on a couple other cards in this set as well as some of his IU teammates.

This entry was posted on December 28, 2012 by Pinola Photo. It was filed under 1991 Leaf, Indiana Hoosiers, OF and was tagged with Alex Dickerson, Baseball, Baseball Cards, Custom Baseball Cards.