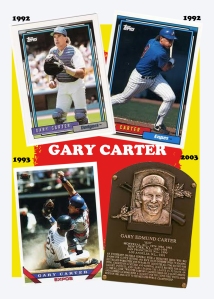 This is the final card of my Gary Carter tribute set. As with the others it is modeled after the ’86 Topps cards that showcased the career of Pete Rose. When I heard of Gary’s death today I knew that I had to do something. This small set was what came of that thought.

This set now comes full circle with the final cards of Gary. He was back on the Expos, and finishing his great career where it started. As with the last card his plaque appears, but this time I put his induction year over the plaque. This has been a fun exercise that I might repeat in the future with some other players.