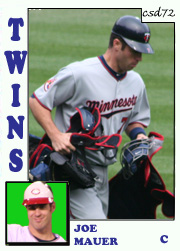 This is yet another card that has been sitting in a folder on my computer for a while. At one point I was not working, and the cards were being made at an incredible pace. This is one from that time period. I couldn’t possibly post them all so I decided to just slowly release them. When I stopped having the time to make them I should have just kept posting the cards, but for some reason I did not. Joe should not be one of my favorite players because he is a star for a rival team. For some reason though I really enjoy watching him play. This card has two pictures from two separate occasions that make it up. The main picture was taken as Joe was jogging out to the bullpen prior to a game against the White Sox in 2009. He didn’t look up so I had to make do with what I had. The inset picture is of him warming up in the Metrodome in 2008. I loved the old school Twins uniforms, but I didn’t know enough about photography yet to make the picture as sharp as it could have been.

This is the 16th card that I have made using a version of the ’84 Topps template. This was the first baseball card that I owned so I love the idea of making my own. The only problem is that inset picture. I really need two good pictures to make this one. This is also the 7th time that Joe Mauer has appeared on the blog. As I said for a rival I can’t stop rooting for him, and I think I have a couple more cards of his to release. Along with Joe Crede, Mauer was the first non White Sox player to have a card that wasn’t based on the 85 Topps set that I started with. That started a trend that gave me way too many cards to make.

This entry was posted on January 23, 2012 by Pinola Photo. It was filed under 1984 Topps, C, Joe Mauer, Minnesota Twins and was tagged with 1984 Topps, Baseball, Baseball card, Joe Mauer, Sports, Topps, Twins.