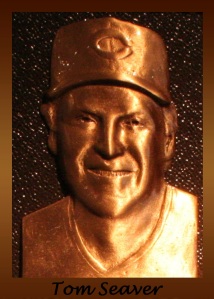 One of the great things about this set is that I get to make a card of Tom Seaver. I have an unwritten rule that I can only use my pictures for cards. That makes it very hard to get some players on a card. This set allows me to make cards of players that I admired growing up, but do not have any pictures of. Tom is one of those guys. I loved watching him pitch for the White Sox, and every August I relive his 300th win. In honor of that I thought it would be the perfect time to put this card up on the site.

The picture was taken at the Reds Hall of Fame in 2009. I am really cheating by using an image off of a plaque, but I really think that it doesn’t look too bad and it gets Tom on the site. I love how the Reds honor their players, and will thanks to that the Reds will have a presence in this set.