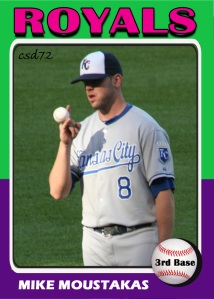 Mike just proves the age old theory that if you hit me a baseball while I am at a game I will make many cards with your picture on them. I thought that since Mike hit me a baseball I would give him some star treatment for a while on this site. I gave him the same colors as a great Kansas City third baseman’s rookie card. As a kid I loved George Brett, and his ’75 Topps card is stuck in my head. I pulled it up to make sure of the colors, and put them on this card. I thought it was only fair.

I took this picture as Mike was getting ready to toss a few with Chris Getz before a game against the White Sox on the Fourth of July. I happened to catch this moment where he stopped the ball on top of his hand. I knew it would make a card, and now it has.