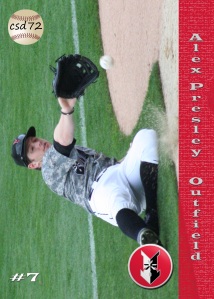 It has been a while since I posted a card from my ’11 custom set. It is not for lack of cards, but for some reason I have been focused on newer cards. Don’t worry though this site will end up with plenty of them before it is all said and done. I thought that since right about now the Indianapolis Indians game I am at should be starting I would put out my first Indians card of the 2011 set. 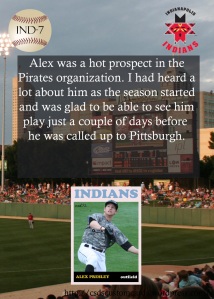 I love this picture of Alex. It is the next frame of the picture that I used for my ’64 Topps card of Alex. I was very lucky that he ended up trying to track down a ball so close to where I was sitting. He just missed coming up with the ball, but it gave me a couple of good pictures for my cards. I didn’t get a really good one of him at the plate so it worked out great that I got this one. I would love to include more pictures of players fielding, but they are much harder to come by.