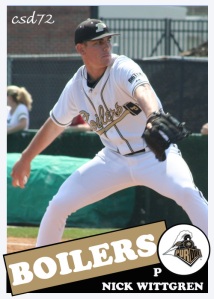 Nick is the closer for the Boilers. Since they are playing in the Big Ten Tournament this weekend I thought that I would post a few cards that I have already made of them.

I took this picture of Nick as he was closing out a game against Michigan earlier this season. It really seemed to be a good day to get some pictures of the Boilers. The light was just right so they came out fairly good.