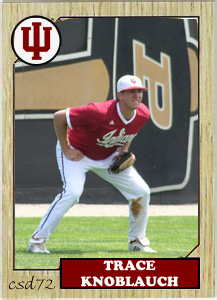 While watching a game earlier this season between the Indiana Hoosiers and the Purdue Boilermakers I noticed a familiar name on the roster for Indiana. A quick check on my phone confirmed that Trace is the nephew of former big leaguer Chuck Knoblach. Chuck was one of my favorite players to watch when he played for the Twins. It is weird to enjoy watching a player on a division rival. I kind of have that now with Joe Mauer on the Twins.

The day that I noticed Trace in the program he did not get into the game. He briefly ran out onto the field to take a glove to another player. Luckily he played the next day, and I was able to get a couple pictures of him. This picture really does not fit the ’87 Topps mold. I liked it though, and wanted to put it on a card. I had the ’87 Topps template open for the rest of the Hoosiers so I decided that sometimes even a classic card could use a small upgrade.