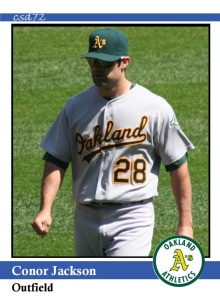 I am really getting into a pattern here putting the cards that I made for the back of my 2011 customs on the site early in the day, and then putting the customs themselves on at night. Maybe I like the custom cards a little more. Some of these ’84 Fleer cards will look better on the back of my card then they do by themselves. This card is alright, but it lacks action. In that respect it is a good copy of the early 80’s cards.

I took this picture as Conor was warming up before playing the White Sox in early April. As I have said before on here I had a great seat to watch the players get ready for the game. I took a few pictures knowing that I might not get a better shot of them during the game.